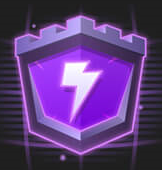 added a post  to  , Mastiff
Change my view- No such thing as "mastiffs"

First of all, the site looks great Gary. This is Tonedog from back in the day. I decided to just randomly see if molosserdogs was still around, fearing the worst, but wow, looks good.

Maybe some controversial debate will help liven the place up a bit? lol

Over the last few years I've been continuing my recreational research into dogs and dog history (which has now spanned many decades), and I've stumbled onto a realization that "mastiffs" basically don't exist and never did.

I believe the mastiff category is merely comprised of retired dogs from various other functional types. They have no real genetic foundation making them a group and no real ancestral function. If you name a mastiff I can tell you how it isn't one and never was, and what it really is.

English mastiff- Boarhound. Essentially a breed created at Lyme Hall by the descendants of Sir Piers Legh to pay homage to the legend of Sir Piers being saved by a mastiff in a battle with the french in 1415. The thing is, before the recreation, the dogs of lyme park were clearly boarhounds. As boars were depleted from the english countryside they continued to keep these boarhounds for a while as "chamber dogs" that would hang around inside and play with the kids. 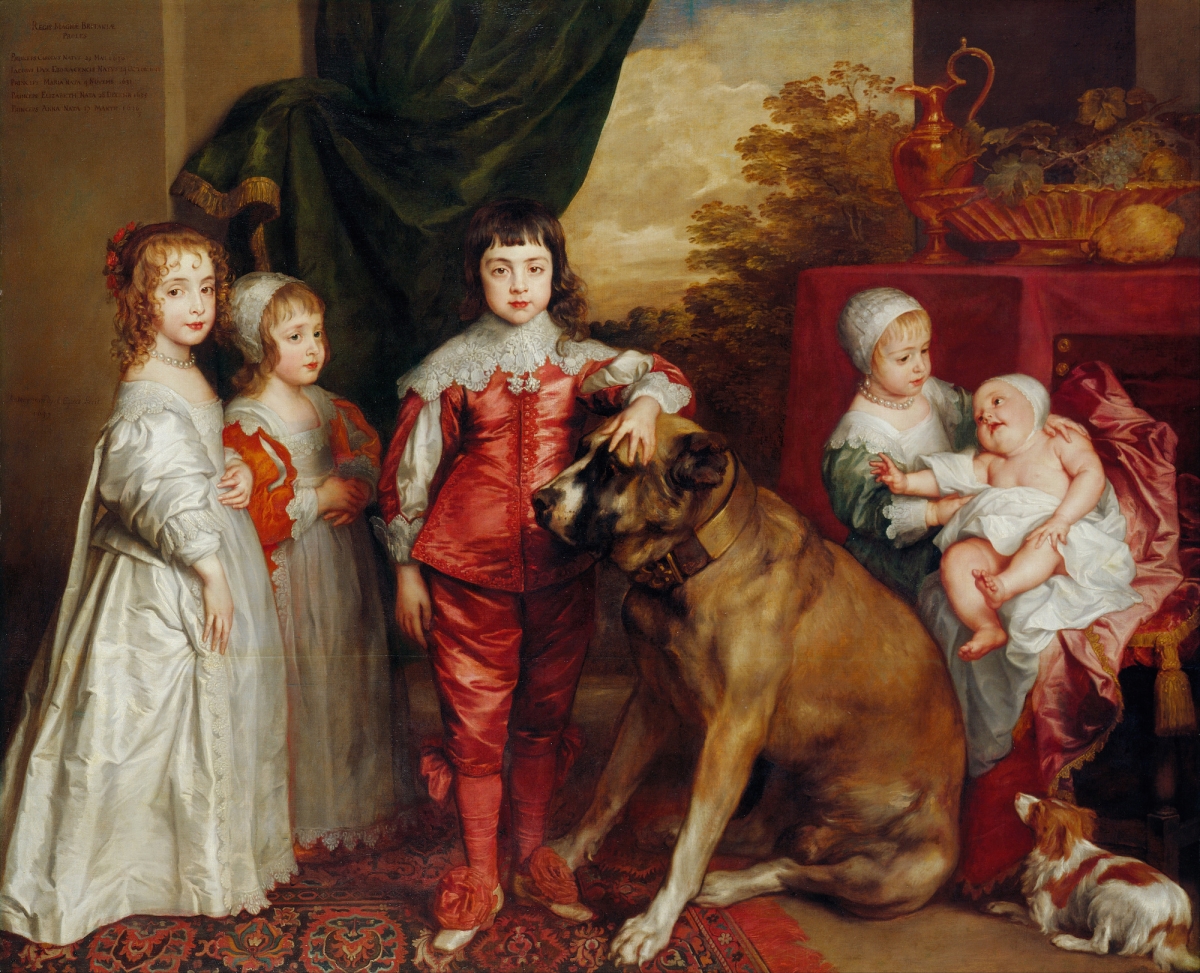 But they were simply england's great danes, really. Retired boarhounds, which initially were created by crossing bulldogs with large sighthounds. Any image of a mastiff in england from before the 1800s looks like a long legged mongrel boar hound, and only rarely won't be referred to as such. I'm rather convinced that's all they were, while they were working functional animals. The modern english mastiff is a recreation based on the legend of these boarhounds, and they made them more bulky and sluggish, but not for any real functional reason.  Big for bigness' sake, with total amnesia about their boar hunting origins.

Neapolitan mastiff -  Bulldog. The neapolitan mastiff and cane corso were assuredly one in the same dog before the early 1900s, and this dog was simply italy's answer to the alano espanol. A bull catching dog. It likely was rarely 100 lbs, usually less. Even in the usa in the 1970s the italian immigrants in new york still called them bulldogs.

Boerboel -  Bulldog. See above. Photos of boerboels from as recently as the 1970s show them to be around 60 lbs, and the name literally translates to farmers bulldog. The giant boerboel is an extremely recent fabrication.

Dogue de Bordeax - Bulldog. See above. Same story. We even have photos of the working dogue de bordeaxs from around 1900. 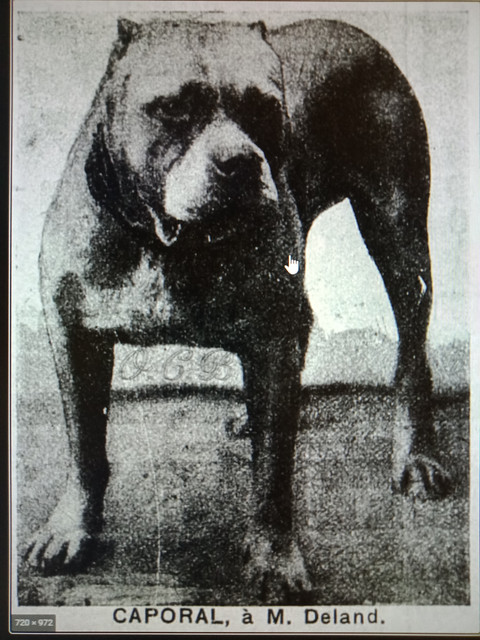 This legendary individual was considered freakishly large at 105 lbs. And in fact it probably got larger as a result of no longer being a bull catching dog (it was a fighting dog, and this probably allowed it to balloon out of the usual size limitations).

Presa canario - bulldog. See above. Find any old photo of a presa canario and it is a small bulldog, and many are even photographed with cattle and working cattle. There was a revolution to turn all these bulldogs into "mastiffs" at some point, probably in all of our lifetimes for most of them.

Fila brasileiro - Boarhound. Or a bloodhound, if you will. Bloodhounds though were merely boarhounds with the job of hunting humans rather than boars. Once again just the result of crossing bulldogs with hounds, large sighthounds and in some cases like with the fila some scenthound thrown in too. I mean it's a bit of a free for all, as it still is with boar hunting dogs.

Bullmastiff - Bulldog x boarhound. Notoriously a bulldog cross mastiff, but by mastiff as established they just meant boarhound. And this was before lyme hall decided to establish the modern english mastiff. Boarhounds had been used to "hunt humans" extensively already, but they found crossing these bulldog based boarhounds back to the bulldog again was handy to get them more compact and specialised for close combat with an armed man (long legs to run down a slow man were redundant, and also they actually wanted to breed them AWAY from an ability to run down the king's deer).

St Bernard - Boarhound. Known to descend from "the alpine mastiff" along with the other "sennenhunds" (bernese and greater swiss), it seems to me the alpine mastiff was really just another european boarhound they took up a mountain, found it had nothing much to do up there, retired it from hunting and gave it other niche duties like pulling milk carts or rescuing people lost in the snow.  Long retired, and modified to be heavy and bulky (and in fact may have been used to help make other mastiffs bulky as well in their recreations), but a retired boarhound all the same. A bulldog/hound mongrel hybrid at it's roots.

Kangal - Livestock guardian. As we all know of course, but we need to acknowledge livestock guardians and the above mastiffs have no genetic connection at all, in fact are extremely disconnected on the phylogenetic chart. No relation. See chart below. 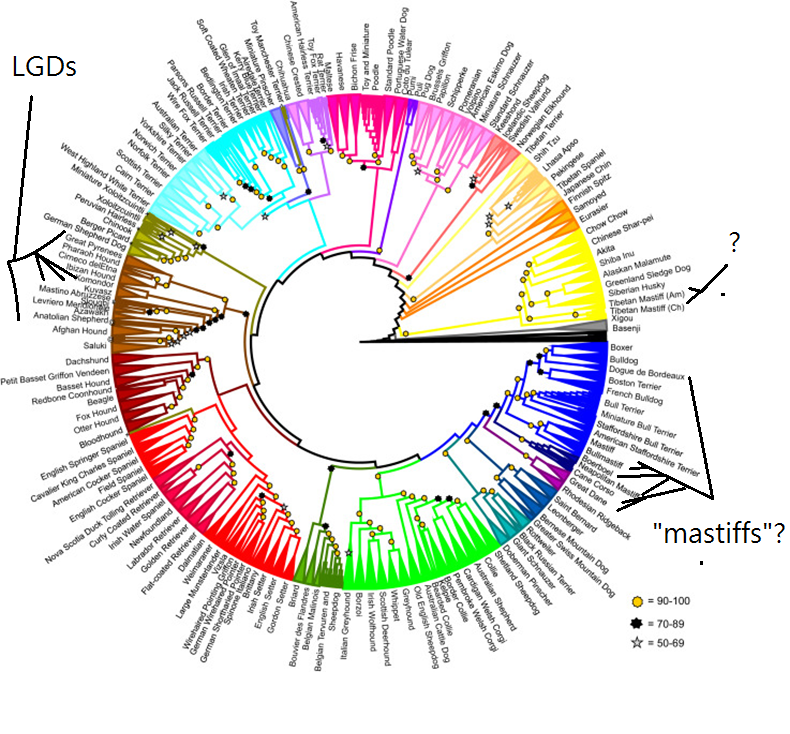 None of this is necessarily new or revolutionary info, however it paints a bigger IMO overlooked picture, an elephant in the room that there's really no such thing as mastiffs. It's not a type of dog. All the mastiffs are really something else, and more importantly aren't all the same thing. Should one of these groups lay claim to the mastiff moniker? Which one? I'd argue none, what does mastiff even mean? "Big" is the closest thing to a definition I can find, and I don't think breeding dogs to be big has done anyone any favours. If you break dogs down to their working roots you can more clearly keep in perspective what they SHOULD be like. Maybe your mastiff SHOULD be able to catch a boar or swing on the nose of a bull, or guard livestock. And if it's not built to do any of those things? Maybe it shouldn't even be.

I believe dogs can be categorised as follows-

Gripping dog (bulldogs, boarhounds and the "retired" alpine mountain dogs - also the proto gripper which IMO is the rottweiler)

And I'd say that covers it? No mastiffs, no "guard dogs", no molossers (unless that means livestock guardian? Since it seems the molossian people only had a livestock guardian and a sighthound, according to my research).

Am I missing something?

Mastini Mayhem Kennel  added a post  to  , Mastiff
Why I choose to work my dogs 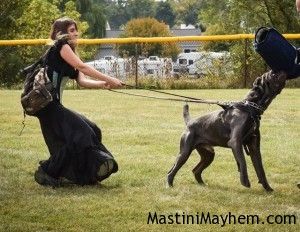 Let’s face it, not very many breeders or Neo’ owners elect to do so. They make this choice for various reasons, which is solely up to them. If they bought and feed the dog, it is their dog or program. I am not here to judge them, I also do not force my clients to work their dogs. I breed towards a balanced animal that Can perform but will also do well in a active home environment, when trained properly. My preference and selection is geared towards a higher energy dog due to the activities I train for.

Why I choose to work my dogs? Because working with them forms a unshakeable bond between the dog and I. Training them properly to bite doesn’t make them dangerous. It makes them safer, because the dog looks to me prior to responding. Working a dog makes a partnership, the dog proves its worth by performance. It also allows me to see it’s faults and weaknesses. Which all dogs have, be it in mind or body there is no perfect animal. I personally want to know each dogs strength and weaknesses, as it allows me to create the next step in my program without having to guess and hope.

Personal protection is what I focus on training wise, but it is not the only or end all be all to train your dog within. Not every home or person has the time needed to dedicate to this type of training. To train a dog to bite is something to not take lightly and one must understand that to do so, you must take every precaution to ensure you have a safe animal around people and in public space. This form of training should never be ego driven, or done at home without a dedicated trainer. With that being said, Neapolitan Mastiffs can compete in many types of sports, to name a few dock diving, weight pull, nose work, barn hunt, tracking and agility can all be done with a Neo’ too. I find that Neo’s truly want to have a job, they thrive when they understand what is expected of them. If you are looking to work your Neo’ but unsure where to start, please don’t hesitate to message me. No matter if your dog is Mayhem bred or from another, I am always willing to help! 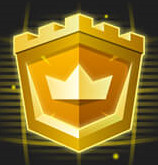 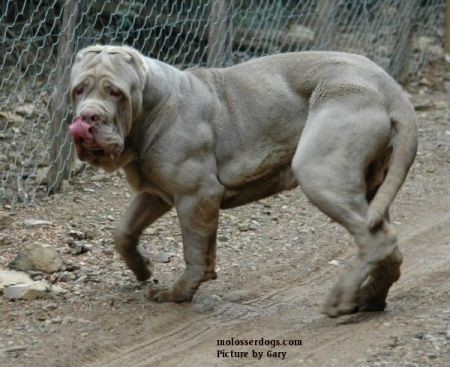 I was just browsing for photos today and saw this photo - which led to a video.  It peaked my interest because the original photo was take by me at a #Alleri Kennel in Italy. The dog in the photo is/was Finalmente - one of the most athletic #Neapolitan #Mastiff - bred by Virgilio Dal Buono.

This is a screenshot of the "fake site video" https://viralchop.com/giant-dogs-of-the-world-part-1/amp/ 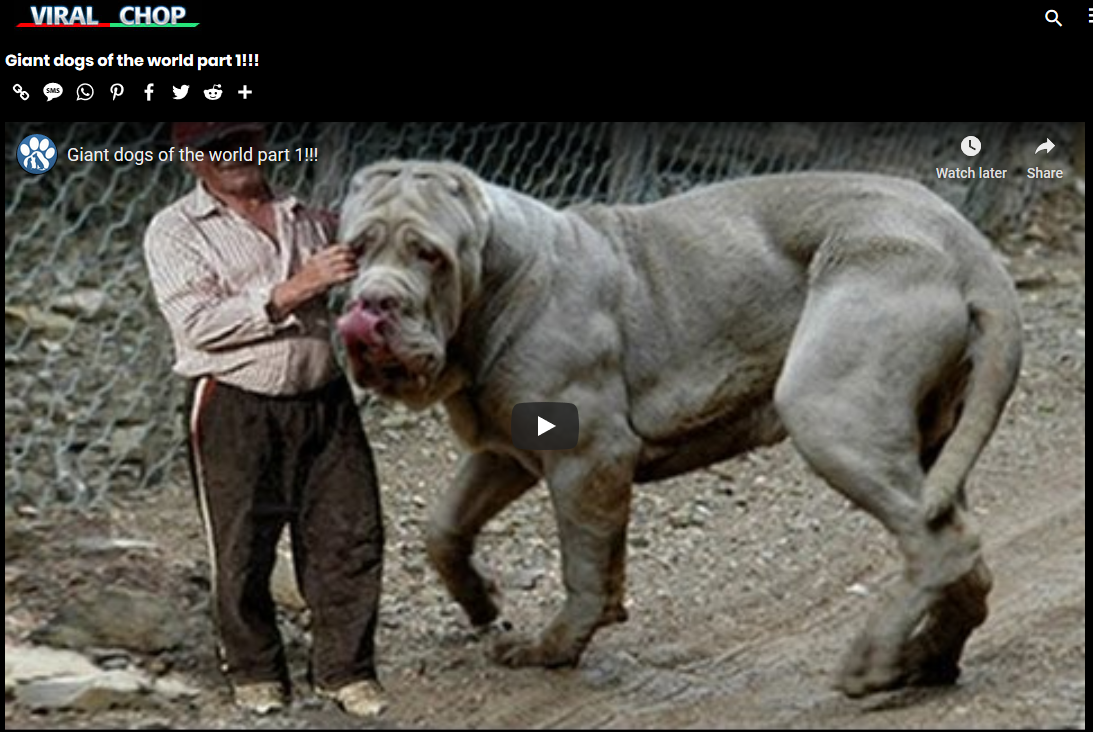 And here is the original photo - taken by Gary Sicard.. lol.. so fake. 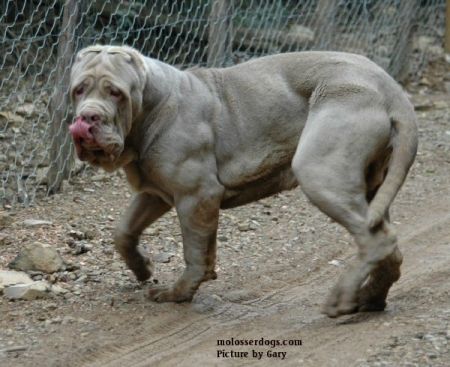 Call out the fakes.