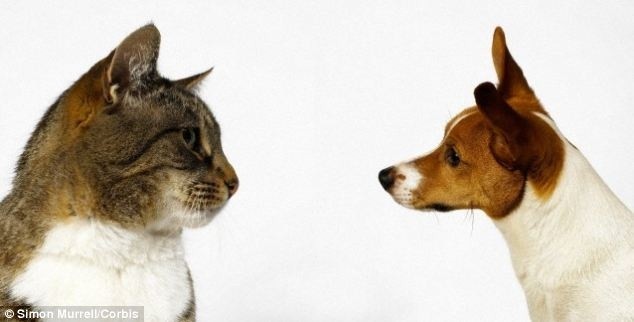 Pet owners have long fought like cats and dogs about whether felines or canines make the best furry companions.

But now a new study claims that cat owners are smarter than dog owners – regardless of their pet's intelligence.

The research revealed that the owners of the two animals tend to have different personalities - with cat lovers being more sensitive and open-minded than dog lovers who are largely energetic.

A study by Carroll University, Wisconsin found that cat owners scored more highly on an intelligence test than dog owners.

Speaking at the annual Association for Psychological Science meeting in Chicago, psychology professor Denise Guastello said that cat owners are more introverted, sensitive and open-minded than dog people. They also tend to be better at breaking rules.

She thinks that the reason for these differences if the types of environment that cat and dog owners are drawn to.

‘It makes sense that a dog person is going to be more lively, because they're going to want to be out there, outside, talking to people, bringing their dog.

‘Whereas, if you're more introverted and sensitive, maybe you're more at home reading a book and your cat doesn't need to go outside for a walk.’

A total of 600 students took a survey to reveal their personality traits and were asked whether they are cat or dog lovers.

Around 60 per cent of people identified themselves as 'dog people' – around six times as many as the number of students who said they love cats. Around a third of those questioned claimed they liked or disliked both animals equally.

Professor Guastello thinks that people might select a pet based on their own personality so that energetic people are attracted to energetic pets, like dogs.

While the study might seem like a bit of fun, the findings could be used to improve the effectiveness of pet therapy in order to make better matches between pets and people. 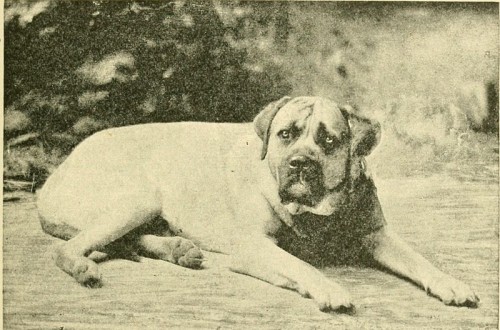 Change my view- No such thing as "mastiffs"
First of all, the site looks great Gary. This is Tonedog from back in the day. I decided to just randomly see if molosserdogs was still around, fearing the worst, but wow, looks good.  Maybe some controversial debate will help liven the place up a bit? lol Over the last few years I've been continuing my recreational research into dogs and dog history (which has now spanned many decades), and I've stumbled onto a realization that "mastiffs" basically don't exist and never did.   Hear me out...  I believe the mastiff category is merely comprised of retired dogs from various other functional types. They have no real genetic foundation making them a group and no real ancestral function. If you n
1949, Mastín Español de Sevilla
1949, Mastín Español from Seville, Spain
The Calgary Model
The Calgary Model   The animal control bylaw in Calgary, Alberta, Canada has been hailed by many as a HUGE success.  While other cities and provinces in Canada are banning breeds, Calgary is choosing education program and stronger enforcement.  What's the end result?  By all accounts, reports and statistics, the bylaw is working!   Not only that, the bylaw works so well and the results are so highly praised, Calgary is inspiring animal control officials outside of Canada to use the bylaw as a model for their own animal control ordinances.     The following is written by Dana Grove:   The bylaw officers in Calgary have taken a stand against breed banning, and responded to dog bite concerns w
Guide to Canine Cancer: Your Most Common Questions Answered
From signs and symptoms to what to do if your dog's been diagnosed, get the important dog cancer information you need.Posted: May 29, 2014, 2 p.m. PST While too many dogs still get diagnosed with cancer each year, new research and treatments are helping increase the quality and quantity of life for dogs with the disease. Education also works as a powerful tool in preventing and dealing with canine cancer. In observance of Pet Cancer Awareness Month in May, the staff at The Veterinary Cancer Center in Norwalk, Conn., offers information on the disease that can benefit both you and the dogs in your life. Do Dogs Get Cancer?Answer By Gina Olmsted, D.V.M.Not only do dogs get cancer, but cancer is
Diffrent coats
These 33 Dogs With The Most Unique Coats On Earth Took My Breath Away. My Favorite Is #7! These amazing dogs have such unusual colors and markings that once you see them, you’ll never be able to forget them. Some of these markings are a result of a rare genetic variations or conditions, but all of these dogs are undeniably beautiful. Of all the adorable and stunning dogs on the Internet, Reshareworthy.com collected and specifically chose the following 33 as the dogs with the most memorable and gorgeous markings!   This sweet husky has a natural little mask. This puppy also wears a mask! Everyone *nose* that this puppy has a lot of love to offer! This is Puck. He’s beautiful A
Beware! Plants Poisonous to Dogs
Beware! Plants Poisonous to Dogs Know which plants and foods are no-nos for your dog. By DC Editors | Posted: Mar 19, 2013, 3 p.m. EDT People are often surprised to learn that there are actually hundreds of plants potentially poisonous to dogs many of which could be in your home, or yard. The following is a list of some plants, trees, flowers, and foods that are poisonous to dogs: American bittersweet roots, leaves, berries Apple seeds, in large amounts Apricot seeds Autumn crocus -  Its active ingredient, colchicines, triggers an anti-metabolic effect that can cause rapidly dividing cells, shedding of the gastrointestinal tract, bloody diarrhea, and vomiting. Learn more>> Avocado l
Science Diet’s “The Truth About Pet Food Ingredients”
June 14, 2011 The Science Diet website now has a page titled “The Truth About Pet Food Ingredients Pet Food Myths Answered with Facts”.  Here’s what Science Diets says and of course I have some follow up… The Science Diet webpage starts off like this… “The TRUTH about pet nutrition.”  They go on to say “It’s important to understand what is myth or fact when making choices about what you feed your pet.”  I agree Science Diet, it IS important for pet parents to understand what is myth or fact when making choices about pet food.  So, let’s see what Science Diet’s myths and truths are… “Myth 1:  Corn is just filler.”“Fact:  A filler is an ingredient providing no nutritional purpose.  Corn is NOT
Training Preferences
There are those that believe that everyone should not use any aversive when training a dog or doing behavioral modification.  They believe operant and classical condition is the only way to go. Others prefer to use force corrections. They use tools like check chains, pronged collars, e-collars, etc. There are also those that call themselves balance trainers. Instead of trying to train a dog or modify its behavior by force only or positive reinforcement only they believe nature teaches us that you need to have a balance between both in when dealing with dogs. I'm curious as to what other preference are? Where do you stand on this subject. I won't condemn anyone for their methods of choice
Search