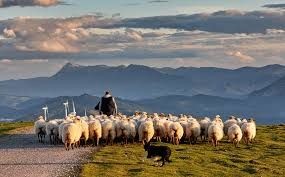 Perro de Vasco is the sheepdog of the Basques of Euskal Herria. The long and rich shepherding history of the Basque nation is built on their strong relationship with these dogs. There are many conflicting theories about the origin of this breed. It is thought that its roots lie in the Eastern Molossers introduced to Spain by the Gypsy traders. Some believe that it is an ancestor of many herding breeds of Spain and France, while others are convinced it is in fact a result of crossing those breeds. The real confusion is linked to the actual appearance of this dog. There are officialy only two types, those being the Iletsua and the Gorbeikoa variants. But within those two types exist a variety of sizes and looks. Some dogs are short and bearded, some are fairly mastiffy and shorthaired, while others are long-legged, long-haired and lupoid in features.

The above-mentioned Iletsua and Gorbeikoa types of the Basque Herder are the only ones that gained official recognition. Other types will probably never get standardized or fully recognized and is still unclear whether these dogs all belong to the same breed. What is known for sure is that they are bred strictly for work and not appearance. It is also believed that the Basque immigrants brought their dogs with them to the United States, where they were instrumental in creating a popular American breed by the name of Australian Shepherd.