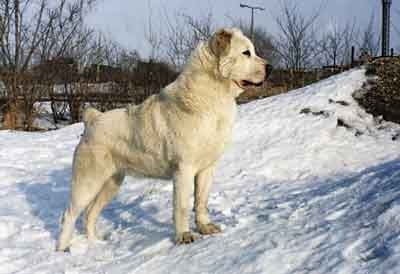 It is believed that the ancient Central Asian dogs are the ancestors of all breeds. This is debatable, but it is almost certain that the Tibetan Mastiff is a descendant of the Central Asian Shepherd Dog and not its ancestor, as often thought. There is a strong possibility that these dogs are the direct descendants of the legendary Armenian Gampr and the Sage Kooche dogs of Afghanistan, to which they are undeniably related. Regardless of their heritage, the Volkodavs of Central Asia are a wonderful reminder of what a natural dog looks like. The common misconception is that the Central Asian Ovcharka is over 4000 years old, when in fact it is a fairly recent Russian creation. Some of the breeds that served as its foundation are much older and truly ancient, but the modern CAO was actually formed in the 20th century. Prior to 1935, the breed was known as the Turkish Shepherd, but this was due to the confusion of some Russian, as well as western authors who failed to differentiate between Turkmenistan and Turkey. Since these dogs don't exist in a single country, but are found all over eastern Europe and Asia, the breed has officially been known as the Central Asian Shepherd Dog and shown under that name since 1938. Alongside the Kavkaz Dog and the Youzhak, the Central Asian Ovcharka is part of the famous Troika, a trio of recognized Russian sheepdogs.

The Central Asian Shepherd Dog is a name used to describe quite a few different breeds, actually. It should be noted that using the word "Alabai" to describe the C.A.O. is incorrect, since the breed known as Alabai is only found in Turkmenistan and is quite different than its other Asian cousins. Although it's popular to use the word "ovtcharka" these days, we need to keep in mind that it is a Russian word, whereas most of these breeds are indigenous to non-Russian regions of the former USSR. Thanks to the introduction of the Caucasian Ovcharka, Moscow Watchdog and German Shepherd Dog to the countries of Central Asia by the Soviet Army, the local populations of indigenous Asiatic Mastiffs were influenced by their blood to varying degrees in different areas, in some cases affecting the actual phenotype of local dogs, while simply giving birth to uncharacteristic coat colours in others. However, even before the Russian occupation, Central Asian Shepherd Dogs had existed in many different types of varying sizes, coats, colours and temperaments, depending on their primary use and region of origin. To this day, it can be said that the Russian dogs differ from dogs found in Turkmenistan, both of these types being very different from those of Afghanistan and Pakistan, which in turn aren't the same as the dogs of Iran, Kazakhstan, Uzbekistan, Tajikistan, Kyrgyzstan and so on. But, until these countries develop strict standards for their dogs and get recognized as separate breeds, the name Central Asian Shepherd Dog is being used for all of them. Some consider even the Sage Koochee and the Sarmatian Mastiff to be nothing more than types of the Central Asian Ovcharka, but this notion is understandably disputed by the fanciers of those breeds. Only the aforementioned Alabai of Turkmenistan and the very rare Tobet of Kazakhstan are somewhat standardized and on their way to possible separate recognition, while most of these other countries aren't showing any interest in doing that, due to their general disregard for the Western ways. Their dogs are bred for work, not for show and that's the way it has been done for thousands of years.

It can be argued that the modern breed known as the Central Asian Shepherd is a result of crossing all of the working livestock guardian dogs indegenous to the countries of this vast region, even if they don\'t truly belong to the same breed, but are in fact relatives coming from different backgrounds, only superficially similar to one another. Also, the Soviet military took their Caucasian Shepherd Dogs with them to all corners of the USSR, where they were bred to almost every native canine population, which played a major role in creating the dogs which eventually became known as Central Asian Shepherds. Establishing a single and uniformed type of the C.A.O. has been a futile endeavor of breeders since the 1950\'s, simply because the differences between some of the breed variants are so great, that matings between them will never result in a single breed type. While the most respected and valued bloodlines are said to come from Turkmenistan and Uzbekistan, it should be noted that only a small number of truly pure dogs is found even in those countries, so having a Turkmen or Uzbek heritage listed in a dog's pedigree doesn\'t necessarily mean that the dog is truly an Alabai or a Sarkangik. Another noteworthy detail is something that has been a source of frustration for breeders of the Central Asian Shepherd Dog for a number of years and that is finding out that the dogs they've acquired in some of these Asian countries are actually either poor specimens or unpure examples, due to the common eastern practice of hiding the best dogs when the foreigners are around and selling them specimens of no real value to the natives. These dogs with questionable backgrounds are often presented in the West as "aboriginal" and are regularly introduced into the existing Show bloodlines, while in effect creating even more diversity within the Central Asian Ovtcharka breed.

Some of the common traits of all Central Asian Shepherd Dog types are the similarities in their overall appearance and the working qualities they possess, partly due to a naturally developed type of dog they belong to and also because of the efforts to turn all of these magnificent Molossers from various regions into a single breed. In their native territories, Central Asian Volkodavs are primarily used in fighting tournaments and for guarding livestock, as well as property protection. While deemed to be shocking and unsavory by most dog lovers, the "wrestling" tradition in Central Asia, like in many other regions around the world, remains a very popular activity in which these dogs are matched against each other. Only the dogs that are proven fighting champions are used for breeding, but this ancient practice isn't as shallow or \"morally despicable" as some might think. In fact, working dogs are tested this way to ensure that only those specimens possessing the necessary drive, tenacity and strength needed to confront and kill a wolf pass their genes on to the next generation. Serious injuries rarely occur, because these tests are done mainly for observing traits such as dominance display, agility and physical strength, not for needless bloodshed, since a badly injured or dead dog is of no use to the shepherd. However, it must be mentioned that the romanticized references to this old practice are also commonly used to justify the present-day popularity of organized dog-fights widely held in Russia and many of Central Asian countries, which have very little to do with preserving or improving the working stock of this glorious breed. Unfortunately, some overly zealous "sport" enthusiasts have been known to periodically cross European fighting breeds into their Central Asian Ovcharkas, giving birth to an even wider variety within this magnificent breed.

Depending on the bloodlines and regional preferences, appearance will differ only slightly, but the temperament and aggression levels can be significantly varied. The so-called "Aboriginal" dogs are quite different than the Show type, just as the Russian military lines are much more human-aggressive than those Central Asian Ovtcharki that are bred to be family companions. Although there are a few different head-types and body-sizes to be found, they are all closely related, their differences being a result of selective breeding over the centuries, done for specific working duties in their respective regions. And that is exactly what Central Asian Shepherd Dogs are - they're working dogs. Whether their job is livestock herding, flock guarding, hunting, animal-baiting, fighting or protecting property, the dogs under this name are almost certainly the main progenitors of all working breeds, either directly, as is the case with the Alaunt, or through their Greek and Roman descendants, which were introduced to the West by traders and used to create many modern European dogs.

Massive, powerful and quite dog-aggressive, this breed is best suited for experienced individuals willing to work on the dog\'s broad socialization skills from an early age. Devoted to its owner, gentle with children and fairly trainable, it can do reasonably well in urban environments, but this breed is definitely not a good choice for an apartment pet. Happiest when given a job, Central Asian Ovcharkas make excellent watchdogs and companions for people living on farms. Not as protective and unfriendly towards strangers as the Caucasian Ovcharka, the Central Asian Shepherd Dog is a more relaxed and easy-going breed. Like its Caucasian cousin, this is a thinking dog, a very calculated and intuitive worker that rarely acts without carefully examining the situation first. This is an easy-moving breed, valued for its agility and speed, but when relaxed and not working, most Central Asian Volkodavs aren't very active. Although commonly regarded as one of the healthiest dog breeds around, quite a few of modern lines of the Central Asian Shepherd Dog suffer from hip and elbow issues, as well as from a number of other health problems which plague many giant working dogs. Black-n-tan, tricolor, brindle, ticked and even uniform black dogs can be found in certain regions, but aren't as valued by some breed\'s purists, even though such colourings have been around for many centuries. Quite a few Central Asian Ovtcharkas have been crossed with Caucasians, affecting both the appearance and the personality of the breed. Unlike the Caucasian Dog, the pure Central Asians don't have high set ears and aren't as heavily built, or rather, they are not supposed to exhibit those physical characteristics, even though many breed examples do show a strong influence of other breeds, especially that of the Caucasian Ovcharka. The body is well-boned and muscular, with strong legs and powerful neck. The head is wide, with a moderately broad muzzle and strong jaws. The skin pigment is dark and the nose, lips and eyerims must be black, although poorly pigmented examples are becoming more common. Usually with docked tails and cropped ears, the Central Asian Shepherd Dogs come in a variety of coat types, ranging anywhere from being as short as 1 inch to those that are over 6 inches in length.

Coming in all colors, most dogs are either white-based with darker markings or lightly colored with white patches of varying sizes. Because there isn't a single standard that fits all of the breed types listed under the Central Asian Ovcharka name, the height and weight, as well as overall type vary considerably. Although dogs that are 25 inches in height exist, most are taller, some variants reaching up to 30 and even 35 inches at the withers. Photo Gallery