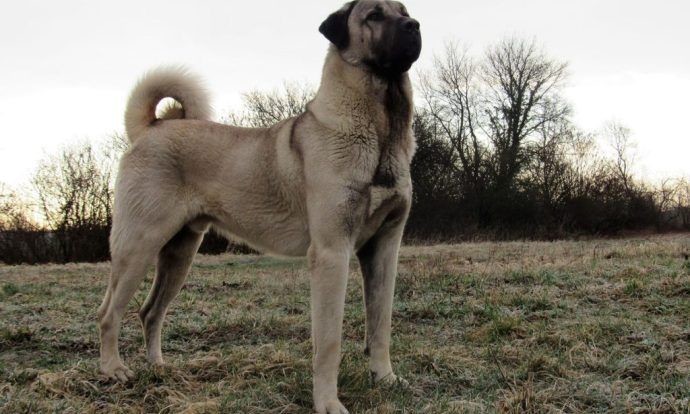 This wonderful ancient Turkish breed is sometimes regarded as just a colour variant of the Anatolian Shepherd Dog in the West. This is definetely NOT the case, seing how there are some major physical and temperament differences between these dogs. In fact, the Kangal is much older and is the most popular and valued breed in Turkey, whereas the ASD is considered to be a "mongrel" of Western origin by most Turks and serious canine authorities. The mighty Kangal Kopegi is the only dog supported and promoted by the Turkish government. Named after the Turkish Kangal family and Kangala, a city in the Sivas province, this breed can also be seen in other parts of the country, but the most prized bloodlines have traditionally come from the Uzun Yayla region. In recent years, the great Kangal Kopegi has been gaining a fair amount of popularity in some European countries, but with that also came the appearance of questionable bloodlines and crosses with other breeds, although excellent representatives of pure Kangals are becoming common outside its homeland, notably in western Europe where they're valued for their impressive size, stable temperament and beautiful appearance. Like the Yoruk Shepherd Dog, the Akbash Kopegi and the Kurdish Shepherd Dog, this colossal breed is a very fast and resilient runner. A courageous Molosser, the Kangal is an excellent wolf killer, as well as a formidable watchdog. Often seen with cropped ears in its homeland and with very large teeth that set it apart from other dogs in the region, the Kangal is the first choice of many Turk shepherds for a flock guardian.

It should be noted that the Kangal is not the only shepherd dog in Turkey and there is a large number of other breeds, sub-types and Kangal-crosses in the region, including some lovely darker wolf-grey or brindled specimens, as well as light coloured ivory-cream Akyaka Kangals without black masks, but they're extremely rare and not favoured by many of the breed's purists, who consider only the Karabash dogs to be the true Sivas Kangals. On the other hand, some experts oppose the idea of a preferred Turkish breed, so they refer to all working dogs of Anatolia as Kangals, explaining the variations within the population as simply regional types, creating some controversy and adding confusion, as well as inadvertently giving legitimacy to the claims made by many westerners that the Kangal is the same thing as the Anatolian Shepherd Dog, which is simply not true. A number of researchers see the Kangal as nothing more than a local variety of the greater Turkish Shepherd Dog population. Some believe that this breed, like most Turkish and Central Asian dogs, is descended from the ancient Armenian Gampr, while many others link it to the old Indian, Assyrian, Persian, Greek and Sumerian wardogs, as well as to the original Samsun Mastiffs and Cappadocian Sheepdogs, but the ancestors of the Kangal were most likely introduced to Anatolia by the nomadic Turkmen tribes, linking this wonderful Turkish Molosser to the legendary Alabai of Turkmenistan. The steppe variety of the Azerbaijan Shepherd known as the Kanjal has also played a role in the formation of the modern Kangal Kopegi, but its influence is disputed by many Turks, some of which even go as far as claiming that the Turkish breed is older and that the Kanjal name is a corruption of Kangal, supposedly proving their theory. In addition, a small number of Kangal fanciers consider these two Molossers to be the same breed, only bred in different regions, but while related, they most certainly are not the same. Another common subtype of this great Turkish breed is the fighting Kangal, developed mostly through crosses with Anadolian Mastiffs, resulting in larger and sharper dogs, as well as occasional colourings not associated with the pure livestock guardian variety of the breed. Due to the popularity of fighting tournaments, quite a few of these prized strains have been used to "enrich" the standard Kangal bloodlines in hopes of adding size and fighting ability over the years, making it difficult for some fans to distinguish one from the other. Being generally more visually impressive to neophytes to the breed, many Kangals from fighting lines have been taken to the West, alongside the common random-bred street dogs and shepherds of Turkey, used to represent the breed as a whole, much to the dismay of traditionalists and fans of the true Kangal Kopegi. There are even efforts to separate the alternative fighting types from the standard Kangal breed, but at this point, nothing has been officialized yet. The least aggressive and most trainable of the Turkish breeds, the Kangal Kopegi is a natural people-pleaser and makes a good family dog when raised properly. Early socialization and training is necessary, because even though mild-mannered, the Kangal can be very confrontational around other dogs, even more so if coming from fighting lines. Reasonably territorial and very protective of its human family, it makes a good property guardian. The Kangal Kopegi is a pure old world mastiff, also referred to as a "heavy shepherd" when describing the breed's head and body type, which distinguishes this mighty Molosser from the leaner Anatolian Shepherd Dog, as well as from other indigenous breeds and unpure examples of the area, all of which have lighter physical features, with the exception of the aforementioned Turkish Mastiff. The Kangal's very appearance suggests power, agility and resilience. This is a very tall and massive breed, with a strong neck, large head and muscular body. Thick and somewhat harsh short coat is preferred in solid shades of fawn, beige and dun, always with a black mask. This specific colouring is known as "Karabash" and is used for any dog of any breed having that appearance in many countries other than Turkey, as is the case with such varieties of the Sarplaninec of Yugoslavia or the Caucasian Ovcharka of Russia, for instance. However, other colourings can be seen in Turkey, depending on regional preferences, such as Karabash-like dogs whose coats range from yellow to brown and even grey shades, some of which can be observed lacking the black mask, as well as acceptable examples with small white markings on the chest and feet, although their purity is sometimes unjustifiably questioned. Some regard the darker dogs with black heads as the examples of the "original (traditional) Karabash type" and the lighter black-masked dogs as being the "refined (modern) Karabash type", without any preference or distinction placed on the purity of either variety. The average height is around 31 inches, but taller dogs can be encountered.