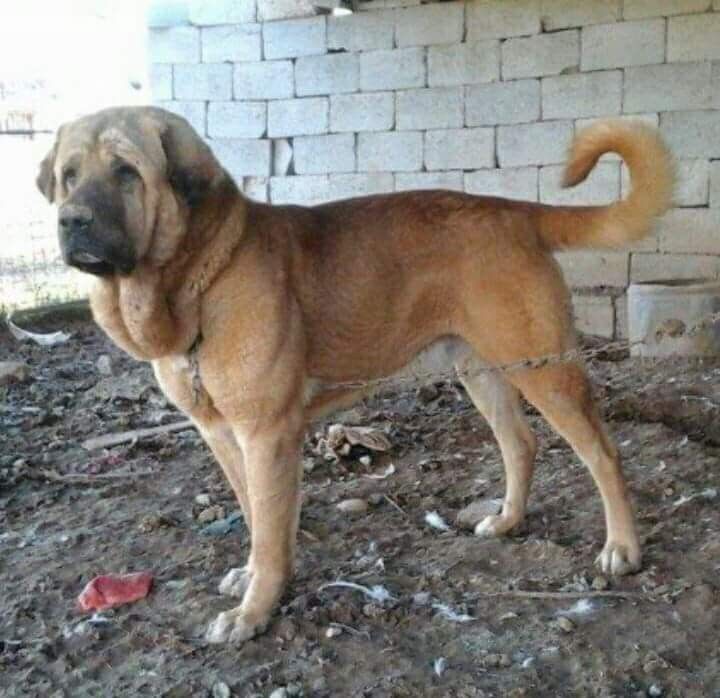 Sometimes referred to as the Pshdar Dog, Kurdish Kangal, this is a very old livestock guardian breed of the Kurds, used to drive and protect their Karakul sheep from wolves, bears and thieves. The history of its ancestors dates back to the 3rd millennia according to Assyrians and Babylonian clay tablets found in what is today's Kurdistan. It is also employed to hunt badgers and other game, as well as to guard the Kurdish settlements. The exact origin of the dog is shrouded in antiquity and fable but some believe that it descended from the Molossers of Central Asia. The Kurdish Shepherd Dog is believed to be a result of the natural breeding of ancient Turkish Kangal type dogs with other molossoid dogs that accompanied caravans and nomads of the time.

It is similar in appearance to the Turkish Kangal Dog, with which it's often confused, but this Kurdish breed is lighter and leaner. It should be noted that the Kurds are not the only ones who keep these dogs, many Turkish families own working Marmar Sheepdogs too, although they rarely acknowledge their Kurdish ancestry, due to the long history of conflict between the two nations. The Kurdish Gammal is also one of the progenitors of the modern Anatolian Shepherd Dog, a breed disregarded by many authorities as an unpure Western creation.

Although the Kurdish Shepherd Dog is relatively unknown and unrecognized, the breed exists in sufficient numbers and is held in high regard by Kurds everywhere. Unlike its closest cousin, the Kangal, this rugged working Molosser isn't as standardized and it comes in a variety of coat types and colors, from short-haired dogs to those with a full rich coat and even some bearded specimens can be rarely seen. Tall, deep-chested and muscular, the Kurdish Dog is a resilient and athletic Molosser.

The Pshdar Dog is a very powerful and self-aware molosser with a marked sense of purpose and highly developed protective instinct and to harness this raw natural power this breed requires proper training and boundaries. Often used as a guardian and herding dog, this powerful dog will protect its property and owners by attacking any perceived threat.  This breed should not be let loose in crowded environments. He is loyal and obedient to his owner and has a good relationship with children and family members.

The head is round, has soft loose skin and some wrinkles big dewlap, a slightly elongated muzzle and strong jaws. The nose can be black, white, brown and red. The ears are usually cropped, but this practice is losing favor and the majority of dogs found today are unaltered. The tail can be either docked or left in its natural state and is usually raised to the top of the waist.

The most common coloring has traditionally been white, fawn, brown, blue and black, but today the majority of the dogs are bicolored. The average height is around 30 inches, although smaller examples exist.

Some photos from Wikipedia provided by  Mohamad137026