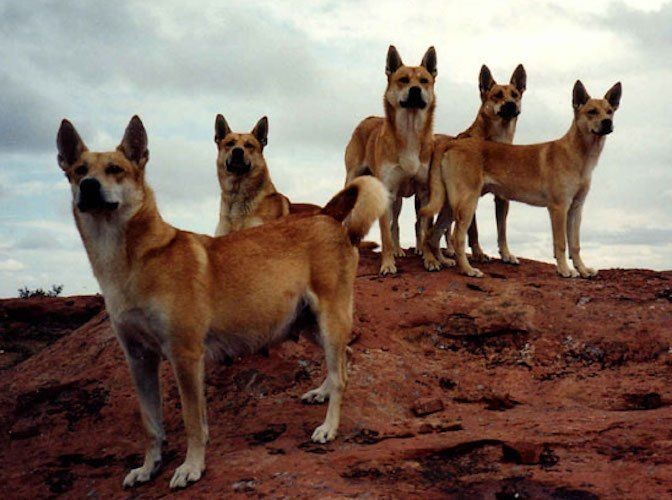 The Carolina dog, also known as a Yellow Dog, Yaller Dog, American Dingo, or Dixie Dingo, is a breed of medium-sized, feral dog that lives mostly in the Southeastern United States, especially in isolated stretches of longleaf pines and cypress swamps.

Since 1996, Carolina dogs can be registered and shown with the United Kennel Club (UKC)in their "Sighthound & Pariah Group", which has published a detailed, formal Carolina Dog breed standard. A breed standard has also been issued by the American Rare Breed Association (ARBA) which includes the Carolina Dog in their Group 5. Since 2008, artificial selection efforts to establish them as a standardized breed which culminated with their acceptance into the American Kennel Club AKC) in their Hound Group in July 2017

Originally a landrace breed, the Carolina dog was rediscovered living as a free-roaming population by I. Lehr Brisbin Jr., though originally documented in American dog-related publications in the 1920s. Carolina dogs show genetic admixture with dog breeds from east Asia.

The ears are characteristic and are erect, very long, and moderately slender, tapering way up to elegantly pointed tips and they can be individually tuned to the direction of any sound, providing an extremely sensitive hearing. The dog ranges in build from muscular yet slender and graceful to somewhat stockier animals. The dogs' legs are also graceful but strong. The hind midsection is firm and narrow. The overall build in a healthy, properly fed Carolina dog is svelte to somewhat stockier, strong and athletic. Paws are relatively large. The snout and the notably elongated, fox-like ears are spitz-like. The tail is usually upturned and often has a hooked kink in it. The coat is usually short and smooth, characteristic of a warm-climate dog.

Colors vary and may include reddish ginger, buff, fawn, black-and-tan, or piebald with or without white areas on toes, chest, tail tip and muzzle. The eyes are at an oblique angle and almond-shaped. The eyes vary in color but are usually dark brown or medium to dark orange. The area along the edges of the eyes is often (but not always) a distinctive black "eyeliner" coloration which becomes more pronounced by contrast in lighter-colored dogs. The lips are often black, even in light-colored dogs. Frequently, puppies have a melanistic mask that usually fades as the adult coat comes in.

This rustic working dog loves to free-range and will travel far from home if not properly contained. As a domesticated feral dog they are capable hunters and can fend for themselves in the wild. A properly raised Carolina Dog can be a good pet, property guardian, or varmint controller with proper training to suppress their wild heritage.

To quote a thought by Cy Brown "These dogs traveled the expanse of this great continent and went as far they could, finally creating a home on the border of Georgia and South Carolina, hidden from human eyes under longleaf pine and in cypress swamp for thousands of years. They scratched and survived and were molded by the land, made by natural selection into the perfect vessel for survival in the wild South. Unlike most dogs, they don't exist because people needed help with a job or wanted a companion. They exist only because Mother Nature decided they earned that right."