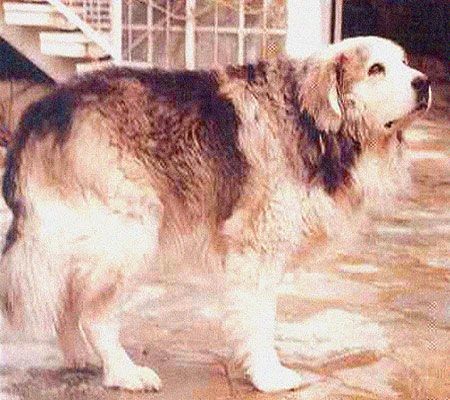 The powerful Skilos tou Alexandrou is one of THE original Molossers, an ancient Greek breed closely associated with Alexander the Great and his war campaigns. Although Alexander kept a large number of dogs, from hunting to guarding to fighting breeds, many of which he brought from other lands he had conquered, the Skilos tou Alexandrou is said to had been his favourite indigenous Macedonian breed. Some fanciers suggest that this impressive mastiff was created by crossing the Molossos tis Epirou with the Skilos tou Pyrrou and the Hellenic Mastiff, while others also include the dogs of Central Asia and Anatolia into its heritage.

The most powerful of all the Greek dogs, this breed is believed by many to be one of the most important Molossers of all time, the one that every other comes from. This is a very rare dog, currently on its way to being recovered by Greek enthusiasts, which is most certainly a good thing. In appearance nearly identical to the Sarplaninac, apart from allowing greater variety of colours, the Alexander's Moloss is a large and impressive breed. Some even believe that this in fact is just a southernmost variant of the Macedonian Sarplaninec, but obviously most Greeks would disagree. As is the case with other mountain dogs of Greece, the Skilos tou Alexandrou is incorrectly lumped under the Hellenikos Poimenikos name, although there are also reports of a possibility of this ancient working dog becoming assimilated into the Molossos tis Epirou breed in the future, alongside some other rare Greek shepherds.

Fearless, intelligent, calculated and massive, this is a dog capable of handling many different tasks with flying colours. More than willing and able to kill a wolf and even a bear, this is definitely not a breed for everyone. It needs very firm handling and intense obedience training. Extremely aggressive towards other dogs, this Molosser will go out of its way to start a fight. Said to be a one-person dog, it does not make an ideal urban companion, although when socialized and handled properly, the Skilos tou Alexandrou can be an agreeable family pet for responsible owners. Very deep-chested, the Skilos tou Alexandrou has a legendary bark, often described by the Macedonian peasants as that of a wolf, a bear and a dragon cursing the Gods in unison. The head is large, with a mastiffy muzzle and powerful jaws. Most working specimens have either one or both of their ears cropped, although a number of uncropped dogs can be found. The body is well-boned and muscular. In some mountain regions, the tail is docked, usually for fighting and hunting purposes, but dogs with unaltered tails, as well as naturally bobtailed examples are also common. The coat ranges from a medium-short to a rich longer one, depending on the breed type and its use. Since this is a working dog, crosses between types are very common.

This breed comes in many colours, solids and multicolours alike, usually ranging from fawn, brown, gray and red specimens with or without white markings to white-based dogs with patches of other shades. Average height is around 29 inches, although taller examples exist.