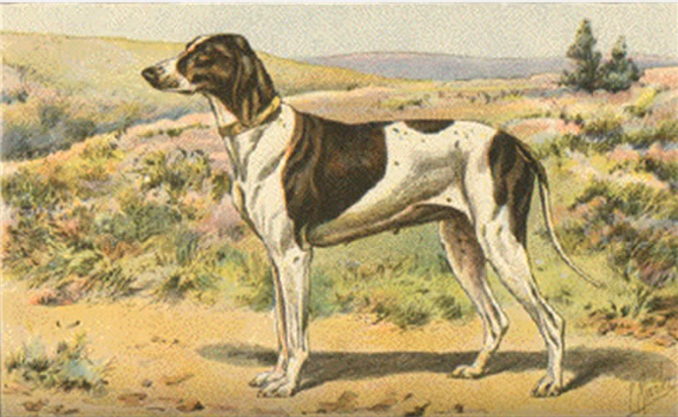 The Dupuy Pointer is know in France as the Braque Dupuy and owes its name to the Frenchman who created the breed. It is sometimes also know as the Greyhound Pointer, Greyhound Braque or the Braque Levrier.

This tall, elegant and powerful breed was more strongly influenced than the other French pointers by the introduction of the English Pointer blood during its creation in the 19th century. It is suggested there were even some influence from the infusion of Greyhound or Sloughi in its ancestry. This assumption is borne out by the 'sight hound shape' of its long, narrow head, narrow head and racy structural shape.

There are several theories about how the breed originated:

It was a local variant of the French Pointer (Braque Francais), with a white-and-chestnut coat, which had been pure-bred for 200 years at the estate of the Marquis of Rochelambert, where it was refined and perfected by a Poitou stock-breeder by the name of Dupuy.

It was an ancient French breed that was nearly exterminated during the ravages of the French Revolution at the end of the 18th century and survived because some dogs were hidden in the Abby of Argensois, where they were protected by a devoted game warden called Dupuy.

It was created at the beginning of the 19th century, in Poitou, where it was developed by two gamekeeper brothers named Homere and Narcisse Dupuy.The mated their own liver and white bitch French Pointer with a Sloughi called Zidar, imported from North Africa by a Lieutenant Roy of the 33rd Artillery Regiment.

The breed was created at the beginning of the 19th century by a French huntsman called Pierre Dupuy who owned a wonderful pointer bitch called Leda which he mated with a dog of unknown ancestry called Mylord, to produce the litter of puppies which were to become the foundation stock of the Dupuy breed.

The breed was created from a cross between an exceptional Poitou Pointer and an imported Greyhound.

It is not unusual to have several vague theories a out the origin of a little-known breed of dog, but in this case, the contrasting stories are all so specific and the surfeit of Dupuys is embarrassing. It is perhaps not surprising that, with such confusion and contradiction about its history.  An official breed standard did not become known until the 1960s.

The Dupuy Pointer stands 26 to 27 inches (65-69 cm). The coat pattern is basically white, with dark brown patches and some ticking. The tail is undocked.  This lively, intelligent, dignified breed is little-known outside France and is extremely rare even inside the country. Some authors believe that is may now be extinct, although this is not certain. One author insists that it had 'disappeared completely' by 1940, but in that case it contradicts the FCI granting a breed recognition on 21 June 1963.