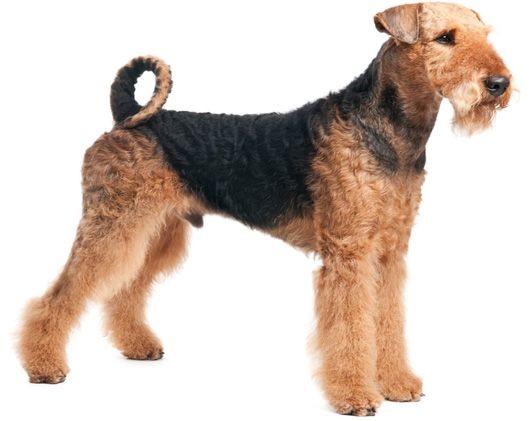 The Airedale is known as the "King of Terriers" and is the largest of the British terrier breeds. Some fanciers maintain that the Bullterrier and the Otterhound were the only breeds used to create the old Waterside Terrier, but it is more likely that the breed was originally developed in the 19th century Yorkshire by crossing old English Black And Tan Brokenhaired Terriers with Otterhounds, with the Irish Terrier and Bullterrier being introduced to its bloodline in the late 1800's, resulting in a change in appearance, personality and hunting ability. In the early 20th century, the mighty Airedale became a valued service dog and a family pet, while maintaining its roles of a popular hunter, property guardian and Show dog. Although the breed was successfully employed by the military in warfare, during the post-WW1 years the public favour began to wane and to this day the Airedale Terrier is only a moderately popular breed worldwide.

Energetic, playful and athletic, it makes an ideal companion for active and dedicated owners. Even though usually overlooked as a worker these days, the Airedale is still a capable hunter and protection dog. Alert and territorial, the breed makes a good watchdog, but it still has a tendency to chase smaller animals and can be confrontational around other dogs, which is why early socialization and training are very important. This powerful terrier's body is square, muscular and well-boned. The skull is long, flat and with a very soft, almost non-existing stop. The eyes are small and dark. The V-shaped ears are usually carried on the side, while appearing somewhat high-set when the dog is excited. The high-set tail has traditionally been docked, but today unaltered Airedales can be seen.

The wiry coat is rough, dense and requires regular care. Only colouring accepted is tan with a black saddle, although examples with a small white patch on the chest are fairly common. Average height is around 24 inches.