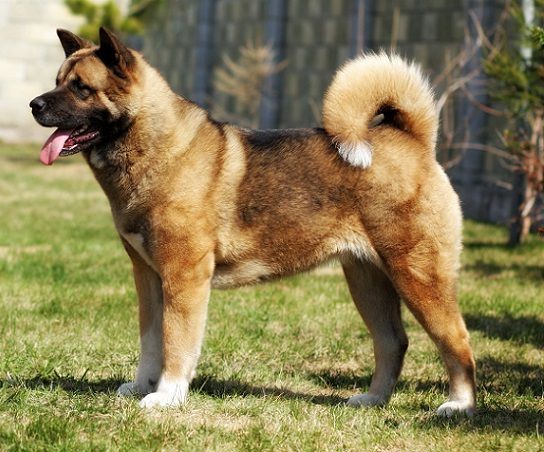 The Japanese Akita is believed by some to descend from ancient dogs that existed before the European continent and Japan were separated by the sea. This powerful spitz is related to large dogs of Central Asia and various indigenous Japanese breeds. Originally called Odate-Inu, early orange Akitas were popular among the Samurai as bear, boar and deer hunters, as well as fighting dogs. During the Showa era many foreign breeds, such as Central Asian Ovcharkas, English Mastiffs, Malamutes, St.Bernards, Bulldogges and numerous other fighting dogs were crossed into the Akita-Inu, to increase its size and improve fighting ability. The Japanese Tosa Inu was reportedly also used later on. The new type was called the Shin Akita and it had drop-ears and was much more massive and vicious than original Japanese dogs. This resulted in an alarming decline in numbers of pure Matagi type Akitas, which led Shigeie Izumi, the mayor of Odate, to start a dedicated salvation programme. The Akita-Inu Preservation Society was founded in 1927 and has been active ever since.

In the WW2, the Japanese military used Akitas as service dogs, as well as a source of fur and food. This meant that any Akita was good enough and the unpure specimens outnumbered the original Akita-Inu dogs once again. In the years following the war, there were very few pure dogs left and the breed seemed destined for extinction. Akitas of various origins were crossed with German Shepherd Dogs brought to Japan by the American forces, further compromising the purity of this ancient breed. An effort to revive the Akita-Inu resulted in the development of two main breeding bloodlines, the Dewa and Ichinoseki strains. The Dewa dogs were bigger and more popular with the American soldiers who took a great number of them to America. From these bloodlines a new type developed and today the American Akita is a separate breed from its Japanese cousin. However, the original Akita-Inu was re-established in Japan and thanks to the efforts of dedicated fanciers and breeders, this magnificient dog can once again be found in its pure form.

The largest of native Japanese breeds, the Akita Inu is a well-boned, muscular and powerful dog. The legs are strong, the head is broad and the chest is fairly wide, but a real Japanese Akita is not as massive as its American counterpart. The erect ears are small and the tail is tightly curled over the dog's back. It can be stubborn, but early socialization and obedience training will keep its dog-aggressive nature and overly protective temperament under control. The Japanese Akita can make a good watchdog and a loving family pet.

The coat is thick and harsh, preferred in orange shades, but common in sesame, red, fawn, white and as a specific bicolour, known as "urajiro". Average height is around 26 inches.