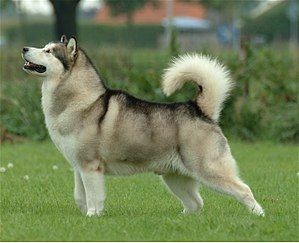 There are different opinions what the Alaskan Husky really is and whether it should even be considered a breed or not. As its name would imply, this breed is native to Alaska, believed to come from the same ancient stock of dogs as the Alaskan Malamute. While the larger and heavier Malamutes became popular urban companions, the working lines of Alaskan sled-pulling dogs kept evolving into what is today known as the Alaskan Husky. The early history of the Alaskan Husky is identical to that of the Malamute, but during the first half of the 20th century, the modern Alaskan Husky breed was developed strictly for sled races through crossings with wolves, Malamutes, Siberian Huskies, Irish Setters, Greyhounds and other working dogs. This particular type of sled-dogs became immensely popular and valued for its endurance, strength and drive. Several lines of the Alaskan Husky were established, like the Huslia, Aurora, Machenzie River, Indian Village, Dunlap and others. Still not recognized as a separate breed, the Alaskan Husky remains the most common and popular working sled-dog around.

Athletic, resilient and powerful, the Alaskan Husky is a strong worker of unmatched speed, stamina and tenacity. These dogs are bred for work and not looks, so a variety of types exist, from shorthaired, medium-sized dogs to those that are tall and richly coated. Ears are usually erect, but some specimens can have drop-ears.

The coat is weatherproof and dense, coming in a variety of colours. Average height is around 23 inches, although larger examples exist.