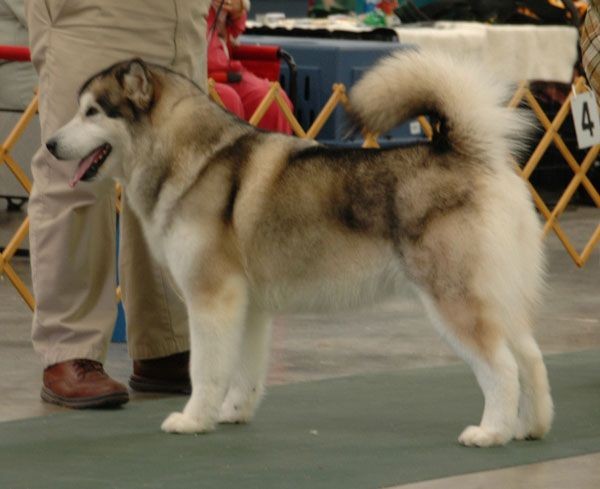 The mighty Malamute is an ancient Arctic breed closely associated with the Kobuk-Kuuvangmiut Inuit tribes of the Alaskan Eskimos. Its origins can be traced to the early dogs brought to the North-American continent over the Bering Straits from Siberia and Asia thousands of years ago. These resilient dogs belonging to the original Laika variety adapted to the new environment and evolved into capable polar bear hunters and settlement guardians. The Eskimos further reshaped their dogs by crossing them with Alaskan wolves and through careful selection established a blueprint for the Malamute type.

In the 18th century, Russian explorers and fur traders introduced their Ovcharkas, Beardogs, Laikas and Huskies to Alaska, which influenced the size and temperament of the Malamute dogs. It was during this period that the Alaskan Malamute became a superiour sled dog, but also a formidable fighter. With the Gold Rush of the late 1800's also came an influx of European breeds, such as the St.Bernard and various shepherds, mastiffs and bulldogges, some of which further improved the Malamute's fighting abilities, but also diminished some of its sled-pulling qualities. Numerous crosses were made during this time in order to create stronger, larger and more resilient sled dogs, but only a few of these breedings were a success, while others were obvious failures. Clearly, specimens that were too massive didn't last too long on the trails and dogs that were too aggressive couldn't be a part of the sled teams. Eventually, the fighting lines dissapeared and from the most successful strains of working dogs came the foundation bloodlines of the modern Alaskan Malamute breed.

Recognized as a breed in 1935, the Malamute became a popular show dog and a family pet. During the second half of the 20th century its appeal flactuated, but this beautiful dog is becoming an increasingly popular breed worldwide. Powerful, muscular and deep-chested, the Alaskan Malamute is truly an impressive spitz with a strong Molosser background. Its head-type is a perfect balance between lupoid and molossoid features. Intelligent, playful and devoted to its owner, it makes a good family companion. This breed can be reserved around strangers, but it is by no means vicious. Dog-aggressivness can be a problem, which is why early socialization is needed. Richly double-coated and weatherproof, the Malamute enjoys colder climates, but can adapt to reasonably warm environments. The only solid colouring allowed is white. The most common bicolours are white with large grey shadings, but these markings are also accepted in sable, red, brown and black. Average height is around 25 inches.