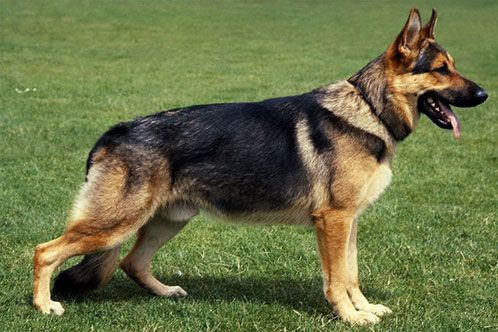 One of the most popular and numerous breeds on the planet, the German Shepherd Dog is the result of a dedicated effort to create a worker of unmatched resilience, trainability, intelligence and versatility. The early ancestors of the GSD were developed from crosses between old Ryoden Wolfdogs, Altdeutsche Hutenhunds, Germanische Baerenhunds, Howavarts, Harz Foxdogs, Serbian Shumadiners, Karavlach Herders, Belgian and Dutch Shepherd Dogs, Karst Sheepdogs, Scottish Collies, Bohemian Shepherd Dogs, Tatras, Beaucerons, Great Pyrs and other European working breeds. These "aboriginal" herders of Germany came in a variety of types, from bearded and wirehaired to shortcoated and longhaired dogs of different colours, sizes and temperaments found in Bavaria, Thuringia, Swabia, Wurttemberg, Frankonia and elsewhere. Just as today, they were known as the Altdeutscher Schaeferhund breed.

Only a few of the variants were somewhat standardized, seing how dogs were bred primarily for their working ability and not for looks. Two of these relatively established types were the smaller, shorthaired, gray-coloured Thuringian Wolfdog and the taller, longcoated, black Wurttemberg Sheepdog. Crosses between these and all the other types were common, but the dogs of Thuringia and Wurttemberg are believed to be the foundation for the Deutsche

In the 1800's, the name "Continental Shepherd Dog" was used for all French, German and Dutch herders, regardless of type and heritage. The short-lived Phylax Society failed to develop and standardize a single German Sheepdog breed, but in the late 19th century a Prussian Cavalry Captain named Max Emil Fredrick von Stephanitz started a serious and concerted selection and breeding programme after purchasing what he believed to be an ideal specimen found at a working dog show. The dog in question was a shorthaired, wolf-gray, straight-backed and erect-eared Hector Linksrhein, thought to be descended from white, black and grey strains of Swabian/Wurttemberg/Thuringian sheepdogs. Hector was soon renamed to become Horand von Grafreth and is known as the first registered German Shepherd Dog, the one that all modern bloodlines are believed to descend from. By matching his prized Horand with carefully selected females from all over Germany and through generations of intensive inbreeding, Captain von Stephanitz established type and appearance standards which led to the formation of the official GSD Club called Verein fur Deutsche Schaeferhund (SV) in 1899, with the help of fellow fanciers Arthur Meyer and Ernst von Otto.

Strict breeding practices and obligatory working trials helped to establish the GSD as a superb livestock herding and protection breed, as well as a capable service dog, used by the German Military and Police for a variety of duties, from guarding government facilities to tracking criminals.

The German Shepherd Dog was introduced to Britain and the United States in the first decade of the 20th century. The GSD Club of America was formed in 1913 by Anne Tracy and Benjamin Troop. In England the breed was promoted by Major Baldwin and Lord Brabanzon during WW1, but they renamed it the Alsatian Wolf Dog, after the Alsace-Lorraine region where they acquired most of their dogs. This was done in order to help disassociate the breed from its German heritage, but it also succeeded in perpetuating the myth of GSDs being wolves or wolf hybrids and vicious attack dogs. In the U.S.A. the name was changed to simply Shepherd Dog and the breed became immensely popular as a valued service animal, used as a police dog, sentry dog, guard dog, guide dog, search and rescue dog, detection dog, as well as a successful show dog and family pet. However, this popularity outside Germany resulted in overbreeding that produced a number of health and temperament issues that are unfortunately associated with the GSD breed to this day. In the early 1920's English breeders founded the Alsatian League and Club of Great Britain to help promote conciencious breeding practices. The American Kennel Club changed the name back to German Shepherd Dog in 1931, but in Britain the breed remained known as the Alsatian until the late 1970's, when Dr.Malcolm Willis managed to convince the Kennel Club to restore the GSD's original name.

The 2nd World War introduced the German Shepherd Dog to every part of the World where the German troops were present, but the breed was also widely used by the Allied Forces, especially the American Army. During these years, the quality of GSDs declined even in Germany, due to loosened breeding standards which helped supply the demanding German Army with war dogs. After the war, many German dogs were left behind in countries around the world and a great number of them came to the U.S. with the returning American soldiers. Being a very popular breed with the majority of Police and Army forces, the GSD can be seen in nearly every country in the world today, on occasion influencing indigenous breeds of many regions and often receiving the blame for their demise.

Even though there is officialy a single GSD breed, there is a variety of types to be found even today, resulting from different breeding practices associated with certain countries. American and British dogs became quite different than dogs of Germany. In the early Cold War years, the Soviets introduced their Caucasian Ovcharkas to East Germany, resulting in an increase in size and longer coats in some bloodlines of the German Shepherd Dog. Over the past 50 years, a number of types developed, namely the West German Working, West German Show, East German (DDR), Czech/DDR, East-Euro/DDR, East-Euro/West German, DDR/West German, American/West German, West-Euro, American/DDR, English Alsatian, Soviet, East-Euro/Soviet, American/Alsatian, Canadian, Czech/East-Euro, East-Euro/Canadian, American/Soviet, American/Canadian, American AKC type, Mini, Giant and others. There is also a number of separate breeds that were either directly developed from the GSD or are intended to be a re-creation of, and in some cases an improvement upon a specific GSD type. Some of these breeds are the Byelorussian Ovcharka, Kunming Dog, Shiloh Shepherd, King Shepherd, American White Shepherd Dog, Alsatian Shepalute and so on.

The German Shepherd Dog is an intelligent, playful and devoted companion. Highly trainable and protective, it makes a good watchdog, but can be overly reserved with strangers and confrontational around other dogs. A well-bred GSD posesses a sound temperament and is generally a healthy breed. Unfortunately, due to its worldwide popularity and improper breeding practices of some unscrupulous breeders, the German Shepherd Dog can suffer from a variety of inherited physical ailments, such as hip and elbow dysplasia, a number of eye diseases, gastrointestinal problems, skin allergies, various heart issues and so on. Mental problems like shyness, viciousness, timidity, nervousness, fear-biting, aggressivness and others are sadly common as well.

The modern western Show type of the GSD breed is rather heavy, slow and has an exaggerated sloping backline, making it very different in appearance and working ability than the original Von Stephanitz dogs and the common working variants.

The coat can vary greatly in terms of length and texture, from very rare roughcoated and bearded dogs to richly plushcoated and longhaired variants, but only smooth/shorthaired dogs are allowed in the show ring. Coming in all colours in the past, the modern German Shepherd Dog can be seen in shades of white, cream, yellow, golden, red, black-n-tan, black-n-gray, black-n-white, sable, wolf-gray, brown, brindle, black and the most common and favoured fawn-n-black "saddle-back" colouring. However, white, cream and yellow dogs aren't accepted for show in most countries. Many coat types and colours are believed to be forever lost in favour of the popular Show look. There is a trend among the breeders of modern German Shepherd Dogs to breed for increased size, but the average and ideal height for this breed is around 25 inches.