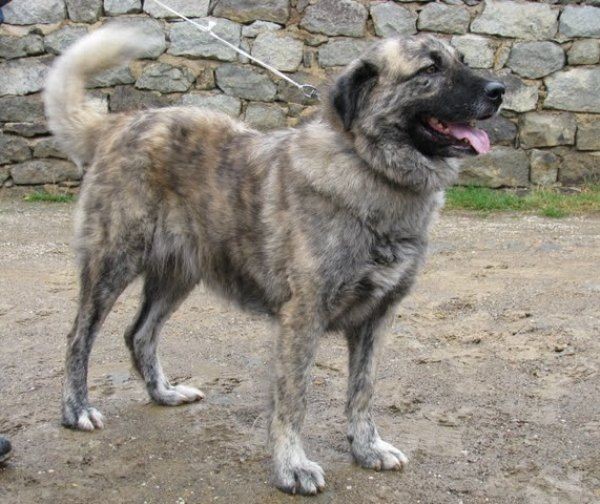 Considered un-pure and inferiour by the Sarplaninac authorities, as well as by traditional Serbian and Macedonian breeders, the Albanian Qen Sharri is commonly found in the northern part of the country close to the Yugoslavian border, near and in the Shara mountain range. However, even though the name may imply Albania as the home country, the majority of the population of the so-called Albanian Shara Mountain Dog "breed" is actually found in the southern parts of Serbia (now the independent country of Kosovo), where the original incarnation was established through matings between Albanian Cattledogs and Albanian Sheepdogs with the existing Sarplaninec population, but maintained as a separate breed for many decades from all other local types by the ethnic Albanian residents of Kosovo. These large, strong reddish-brown dogs with white chests, legs and muzzles could still be encountered in Kosovo until the mid-1990's, but there aren't many left today, due to the assimilation in the new creation commonly referred to as the Deltari Ilir, better known as the Albanian Sharplaninatz.

Practically non-existent in Albania, the so-called Deltari Ilir is still most numerous in Kosovo, but thanks to the great popularity of organized dog fights, many specimens can also be seen outside of its designated home region, mostly in other parts of Serbia, as well as in Montenegro and Macedonia. Some Yugoslavian Sarplaninac fanciers speculate that a number of Albanian dogs have been crossed into many show and working Sarplaninac strains, due to the size, strength, prey-drive and tenacity of Albanian fighting lines, with detrimental consequences for the pure Sarplaninac breed, resulting in uncharacteristic colourings and temperaments occasionally seen within the modern Sarplaninac population. On the other side of the issue, most Albanians consider the Yugoslavian Sarplaninac to be an Albanian breed anyway, disregarding any concern that Serbian or Macedonian Sarplaninac breeders might have, perpetuating old conflicts and historical grudges that have plagued the area for centuries. These issues are strictly political and mainly based on nationalistic fantasies and propaganda, being very much tied to the Kosovo question, which is a matter of great concern for many Sarplaninec enthusiasts. Even though the lines between them are constantly getting blurred, there are three main varieties of the Albanian Sharplanina Dog, mainly separated by their history and ancestry, these being the true dogs of the Shara mountain region simply kept by Albanian owners, belonging to the old Sarplaninac group, apart from allowing non-Standard colours, such as brindle and red, which aren't valued by the Serbian and European fanciers of the Sarplaninac breed, with the other two variants being the almost extinct true Qeni Kosova and the increasingly popular Albanian fighting crossdog. In recent times, the Albanian fanciers from both their native land and those living in Serbia and Macedonia, have been working on the separate standardization and recognition of the Albanian Shara Mountain Dog, with some of the suggested names being Deltari Ilir, Qen Sharri, Kosova Sheepdog and Shquiptar Qeni Sarrit, but separate recognition is not enough for many Albanians, who insist on using the "Illyrian Sheepdog" name for the entire Sarplaninac breed, regardless of its variants, while claiming to actually be Illiyrians themselves and the Sarplaninac "naturally" being their dog, understandably angering a great number of Sarplaninac fanciers, as well as history scholars from around the world. Although dog-fighting has had a long history in Albania and many creations have been named the "Albanian Fighting Dog" over the years, the modern Deltari Ilir representatives are believed to be a result of crossing the working Sarplaninac and Goranac strains with other breeds, such as Central Asian Shepherds, Kangals, Kars Shepherds, St.Bernards and Caucasian Ovcharkas, as well as the Albanian herding dogs and imported European and American fighting mastiffs and bulldogges. It should be noted that as much as most Deltari Ilir fanciers resent the "non-Albanian" bloodlines, they continue to regularly import oversized Sarplaninac examples from a number of Serbian crossbreeders into Kosovo for their own breeding purposes. Although a capable livestock guardian, the main role of this dog is that of a fighter, but it also makes a good property watchdog and a loyal companion when handled properly. Depending on the bloodlines, Albanian Sarplaninacs can be either moderately aggressive or extremely vicious, but are all very territorial and unfriendly towards strange dogs. The body is well-boned, with a wide chest and a large head, but since neither recognized nor officially standardized as of yet, the Qen Sharri doesn't have a strictly set type, with some dogs having narrow muzzles and long legs, while others can be seen with mastiffy facial features and wider bodies.

The coat is thick, densely undercoated and medium in length, although some richly longhaired and very short-coated examples are also common. Any coat colour is encountered and permitted, from white to nearly black representatives, with most dogs being brindle, reddish-brown or dirty gray in colour, oftentimes with white markings. The average height is around 26 inches, but much larger dogs can be found, some of them reportedly reaching over 34 inches at the withers.