As its name implies, this famous mastiff breed comes from Naples and surrounding areas in Italy. Descended from the legendary wardogs of the Assyrians and Roman arena fighters, the ancestors of the Mastino Napoletano are believed by some to had been the legendary wardogs of Alexander the Great, but seeing how the old Molossers that Alexander took with him on his war campaigns were longhaired, mountain type dogs, like the breeds of Macedonia and Greece, such as the Hellenic Mastiff, Sarplaninec, Molossos tis Epirou, as well as his own famous strain of such dogs known as the Skilos tou Alexandrou, it is more likely that these large shepherd dogs came into contact with existing Roman cattledogs, guardians and fighting dogs and from then on went through generations of crossings and inbreeding, without much attention given to appearance or standards of purity, with ferociousness and working ability being the only qualities of importance. It is claimed by some that the Romans brought old English mastiffs from the British Isles which were supposedly introduced to the bloodlines of their arena dogs, but it should be noted that the Mastin Espanol also played a much more important role in the development of the dogs of Naples, as did the Spanish and Sicilian working bulldogges. For centuries this breed was considered to be just one of the regional types of the working Cane e Presa population of Italy, alongside the Cane Corso, Bucciriscu Calabrese, U Vucciriscu and other varieties used for guarding, fighting and hunting duties prior to the World Wars. The Neapolitan Mastiff finally received its name in the 1940's.

Today, the Neapolitan Mastiff looks and acts very different than it did in the past. The modern version of the breed was developed by Dr.Pierro Scanziani in the years following WW2, when there were very few original proto-Neos left. Some outcrosses with larger Cane Corso, English Mastiff, Deutsche Dogge, Saint Bernard, Newfoundland, Bloodhound, Fila Brasileiro and others were reportedly made to increase the number of specimens for breeding. Scanziani and his supporters exaggerated the initial population's extreme physical features through planned perpetual inbreeding, as well as occasional introduction of other breeds into the Neo's bloodline, with the English Mastiff becoming everyone's favourite outcross. Soon, the present-day incarnation of the Mastino Napoletano began to take shape and other breeders joined the revival efforts, at first within Italy and later in other European countries, as well as the United States. The first Standard was written in 1946 and the breed was officially recognized in 1949. Since then, the Standard has been changed a few times, starting in 1965, then in 1968 and once again in 1989, following the changes in appearance within the breed. The breed's unusual looks and highly romanticized history of origin have enamoured a great number of fanciers wordwide, many of which are led to believe that their breed of choice is an ancient and pure Molosser, while in reality being a fairly young creation without much purity to speak of. Although inbreeding is used to set type within the breed, utilizing the blood of other breeds when breeding the Mastino Napoletano is a practice that has never been abandoned by the majority of breeders and is a method still widely used today, the English Mastiff still being the most common choice, with the Dogue de Bordeaux, Presa Canario and the Great Dane occasionally being employed as well, while the use of breeds such as the Bullmastiff, Cane Corso and even Shar Pei has been rumoured for quite some time. Of course, most breeders deny such allegations and maintain that their Mastini are not only pure, but also the same breed as their ancient Roman progenitors.

A very popular breed all over the world, this seemingly lethargic and slow breed makes an excellent watchdog, as well as a remarkable family pet when raised properly. The charming Mastino Napoletano is a relaxed, but alert and intuitive property protector. While not as active or energetic as some other guardian breeds, it is a very intelligent dog, conserving its energy for the appropriate situations, when its lightning-fast reflexes, fierce personality and intimidating stature are employed to protect its master and property, which a well-bred Neo is more than capable of doing. Gentle, loving and famously loyal to its owner, the Neapolitan Mastiff is naturally reserved and aloof with strangers, as well as being unfriendly to other dogs at times, needing broad socialization from an early age and responsible handling by an experienced owner. Although not as agile or ferocious as its ancestors, this is still an immensely powerful Molosser, with strong guarding instincts and a punishing bite. 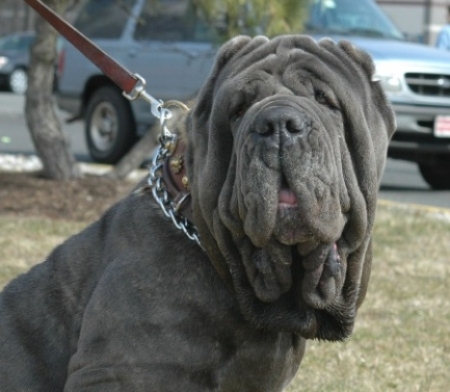 Sadly, the breed has a short lifespan and a number of health issues, likely due to the long history of inbreeding and the current preference for overly heavy and oftentimes ridiculously wrinkled dogs. Its trademark loose, hanging skin and massive body have been the breed's instantly recognizable physical characteristics for a very long time, although not as exaggerated as they are presently. The proper head type is an important part of the overall appearance of a correct Neo, but many extreme examples can be encountered today, with overly short muzzles, excessive wrinkles and having breathing problems, eye issues, movement difficulties and poor temperaments. Large-headed, wide-chested and well-boned, the proper Mastino has a nicely balanced and moderately short muzzle, with a defined stop and strong jaws, but its facial features shouldn't be reminiscent of neither bulldogges nor bloodhounds. The ears are usually cropped and the tail is docked, although unaltered examples are commonly found as well.

The coat is short, soft and glossy, coming in solid shades of grey, blue, black, tawny, red and mahogany, some brindled, with or without small white markings on the chest. There was also a rare all-white variety in the past, thought to be an influence of the old Dogo Siciliano and the Abruzzese Mastiff, but this colouring is no longer found and not accepted by the Standard. Average height for the modern Mastino Napoletano is around 28 inches, but much smaller, as well as taller dogs can be seen too.

This impressive working dog is sometimes seen as the Pakistani version of the Indian Bull Terr breed, but there are clear appearance and temperament differences. The Pakistani Gull Terr has drop ears, unlike the erect ears of the Indian...