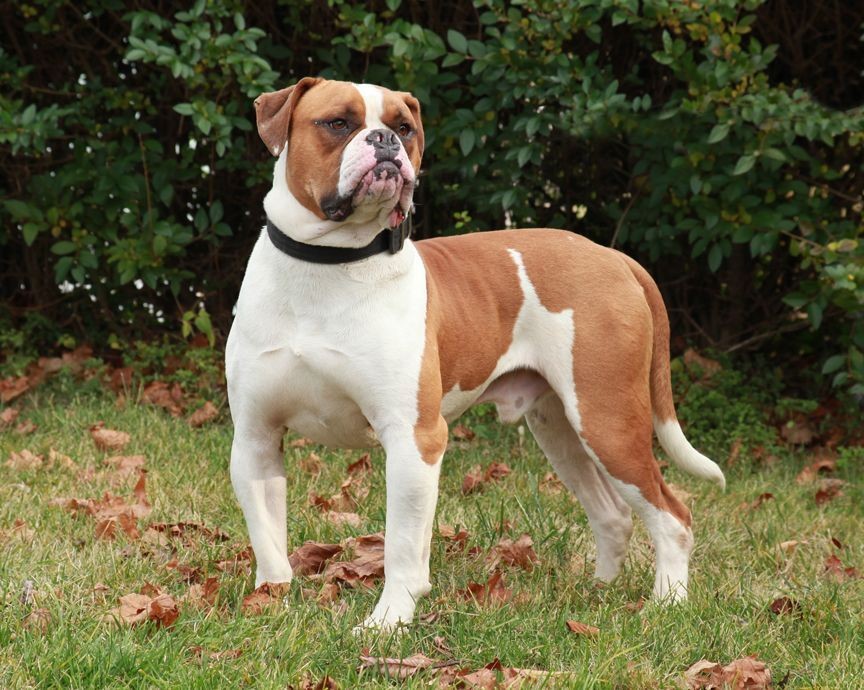 Originating in 1700's America, the Old Country Bulldogge was developed from the original British and Irish bulldog variety, as well as other European working dogs of the Bullenbeisser and Alaunt ancestry. Many fanciers believe that the original White English Bulldogge survived in America, where it became known as the American Pit Bulldog, Old Southern White Bulldogge and Alabama Bulldog, among other names.

A few regional types were established, with the most popular dogs found in the South, where the famous large white plantation bulldogges were the most valued. Some bloodlines were crossed with Irish and English pit-fighting dogs influenced with English White Terrier blood, resulting in the larger strains of the American Pit Bull Terrier, as well as the smaller variety of the American Bulldog. Although there were quite a few "bulldogges" developed in America, the modern American Bulldog breed is separately recognized. Unlike most bully breeds, this lovely bulldog's main role wasn't that of a fighting dog, but rather of a companion and worker. Quite larger than most bulldogs, it excells in dog sports like weight-pulling and makes a great farm dog and even a capable hunter.

While the old bulldogges were disappearing in Europe and England, the American variety remained unchanged until the WW2, when their numbers declined drastically, inspiring a few enthusiasts to unite in an effort to save the breed from extinction. In the 1960\'s, John D. Johnson and Alan Scott joined forces with Louis Hegwood, George Lee Williamson, Calvin Tuck and others in collecting surviving southern bulldogges and selecting the best specimens to serve as a foundation for the revival program. After the decision to abandon the American Pit Bulldog name to avoid confusion with the APBT, the breed was registered as the American Bulldog. Outcrosses were necessary early on to increase the gene pool and the population of the breed, but not everyone agreed with the choices some breeders made.

Although an important figure in the development of the modern American Bulldog as a recognized breed, Johnson decided to introduce the English Bulldog into his lines, alienating a great number of enthusiasts in the process, many of which never fully got over it. Due to disagreements over the ideal type and breeding practices, Alan Scott and J.D.Johnson put an end to their colaboration, opting to go their separate ways and breed their dogs based on their personal ideals. To this day, two main types of the modern American Bulldog are the Johnson and Scott bloodlines, but other strains exist, like Painter, Leclerc, Hines, Old Southern White and so on.

Large, massive and broad-headed, the well-mannered, yet very protective Johnson dogs remain more popular as family pets and PP dogs than the smaller and lighter built Scott Performance bulldogges, which are considered to be far superiour farm workers and hog hunters. However, most present-day dogs are crosses between all the types, as well as some other bully breeds.

There is currently some talk of possibly classifying pure J.D.Johnson dogs as a separate breed in the future, due to noticeable differences in appearance, as well as common conflicts within the American Bulldog breeder community, concerning the breed's Standard and purity guidelines. It has been rumoured that the modern Johnson lines contain some English Mastiff and even St.Bernard blood, but this hasn't been proven. Even though the Scott type was directly developed by crossing early Johnson's dogs with more tenacious breeds, such as the American Pit Bull Terrier, it is gradually becoming accepted as the breed ideal, regularly outperforming its ancestors. This is partly due to the value placed by many bulldogge fanciers on function, rather than form of working dogs. The American Bulldog was officially recognized by the United Kennel Club in 1999 and is enjoying great popularity in the U.S. and around the world.

The American Bulldog is a courageous guardian and a loving family pet, but it needs experienced handling and early socialization. Even though this breed is not as dog-aggressive as some bullies, it does like to play rough and won\'t back away from a confrontation. Unfortunately, some misguided owners foolishly put these dogs into fighting arenas with Pit Bulls and other breeds, almost always with terrible consequences.

There are also some unpure bloodlines to be found, so potential buyers should be careful. Boxers, Bullmastiffs, Presa Canarios, Olde English Bulldogges, AmStaffs and other bullies are at times crossed into the American Bulldog bloodlines, sometimes with the intention of improving its working abilities, but more often simply for appearance and other reasons. Due to this breed's ever-increasing popularity in America and worldwide, potential owners should carefully research A.B. breeders in order to ensure a quality purebred purchase and to avoid Pit Bull crosses and poorly bred dogs. The American Bulldog is a strongly built, powerful and energetic dog, completely devoted to its owner.

The coat is short and glossy and accepted in every colour, except for solid black, blue or any type of tricolour. The most popular dogs are white, with or without markings. Average height is around 24 inches, but larger dogs are common.