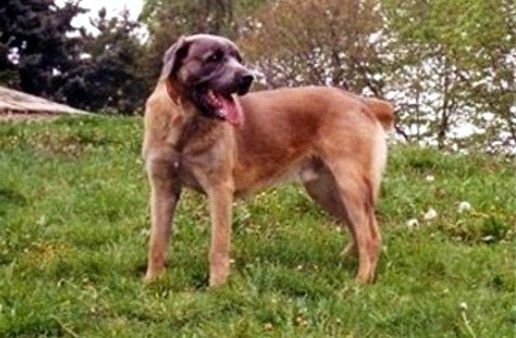 The Serbian Defense Dog is a re-creation of the old Serbian Mastiff of the Middle Ages, which became extinct during the early 20th century.

Initially disregarded as yet another "cocktail" breed, the SDD is today deservedly a well-known and respected guardian in its native Yugoslavia. It was developed by Nenad Gavrilovic, a Bosnian herbalist and medicine man in the early 1980's, but the final standard was written in 1991. Using his domesticated pack of Serbian wolves, working Bosnian Tornjaks, German Rottweilers, Neapolitan Mastiffs, American Staffordshire Terriers and game-bred Pit Bull Terriers, Gavrilovic created a breed of immense physical strength, fantastic guarding instincts and impressive fighting abilities. Even though it wasn't created with the intention of being a gladiator, the Serbian Defense Dog has achieved legendary status in the dog-fighting circles for being an undefeatable canine warrior. Initial stock was indeed tested in a traditional method of matching potential stud dogs against a number of breeds, but once the bravest and strongest examples were selected for further breeding, no further competitions were held. However, the notoriety of early SOPs as excellent fighters made the breed popular with the criminal element in the Balkans, in whose grip the breed received not only some additional blood of other breeds, but also somewhat of a bad name. Routinely defeating even the most tenacious Pit-Bulls and other fighting breeds, it is believed by many to be unfair matching the Srpski Odbrambeni Pas against any dogs other than members of its own breed, but some fanciers consider this ability to actually be a detractor from other qualities the breed possesses, because the Serbian Defense Dog is a versatile Molosser, capable of handling a great number of duties with ease, as well as being a wonderful urban companion for reponsible owners.

This Serbian breed was moderately popular before becoming very rare thanks to the Yugoslavian wars in the 1990's, but today, this large mastiff is once again finding its way into many European countries and the enthusiastic followers of the SOP are working on its official recognition. The mighty SOP was originally bred and promoted primarily by its creator and the Belgrade Zoo, but today there are quite a few reputable breeding stations to be found in Serbia. Agile and powerful, this mastiff is a very healthy and resilient Moloss, due to the strict selection philosophy of dedicated breeders authorized by Gavrilovic, who approves only those breeding programmes based on working abilities and rigourous physical standards.

With the refinement of the breed and a more serious approach to breeding for consistency in terms of height, weight, coat type and colours over the past few years also came the appearance of two basic types of the Serbian Defense Dog, the first one being the old Bosnian variety, sometimes referred to as the "aboriginal" SOP, still having a slightly thicker and longer coat, somewhat shepherd-like features and coming in a variety of early colours no longer preferred by present-day enthusiasts in Serbia, most of whom are promoting the modern SOP type, whose population, while quite bandogge-like in appearance, is much more uniformed and likely to receive official recognition than the loosely defined breed type of Bosnian-bred lines. These two directions of the breed are explained by some as being a result of simply selecting a specific look and tight linebreeding, while others point out that some breeders of the modern SOP type had also employed the Bullmastiff as an outcross a few years ago, with the use of the Japanese Tosa Inu and even the Fila Brasileiro also being rumoured. Both variants within the breed have their supporters with strong opinions on which one is the "correct" SDD type, with the promoters of the modern incarnation complaining about the "aboriginal" population lacking consistency, while the fans of the old style SOP claim that the increasingly popular "new" type of the Serbian Defense Dog isn't distinguishable enough from many other western bandogge-type breeds, thus not being truly representative of its home region. Although the breed Standard has been written for some time, it is suspected that it will be modified to accommodate the new type of the Serbian Defense Dog due to its popularity.

The Srpski Odbrambeni Pas, or SOP for short, possessess remarkable intelligence, as well as a noble, intuitive and strong-willed personality. This brave goliath makes a superb property guardian and a capable service dog, even though it's characterized by some of its fanciers as a one-person breed. A devoted family dog, the SOP needs experienced owners, who never employ overly firm and violent handling. The Serbian Defense Dog responds very well to obedience training and makes a truly remarkable personal protection dog, but early socialization around humans and dogs is necessary to make sure that the SOP doesn't grow up to be an extremely aggressive and overly territorial dog. However, a number of people still use these proud dogs for fighting duties and there are some unpure bloodlines of questionable quality and uncharacteristic temperaments to be found, which aren't endorsed by the breed's creator, making the standardization process difficult.

This is an athletic Molosser, sure-footed, strongly boned and wide-chested. The neck is very muscular and the head is elegantly broad, with powerful jaws and a moderately defined stop. A well-bred SDD is a squarely built mastiff, with a straight back and broad shoulders. The tail is always docked and the ears are left in their natural state. Regardless of coat colour, this should be a darkly pigmented dog, with a black nose, eye-rims and lips. The coat comes in two lengths, the "bully-style" short coat and the medium-short flat coat with a thick undercoat, making the Serbian Defense Dog suited for life in every climate.

The preferred colours are solid fawn, yellow, wheaten and red, with or without a black mask, although grey, black, brindled, black-and-tan and even blue-coated dogs are still fairly common, some with white markings. Average height is around 27 inches, but taller, as well as smaller dogs exist.