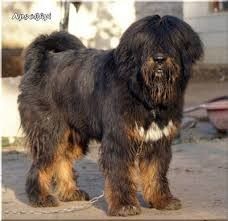 The Kyi-Apso is an ancient bearded Molosser, believed by some to be the oldest of its kind and a variant of the Tibetan Mastiff breed. Indigeneous to the Mt.Kailish region of the Tibetan Plateau, this rare dog has evolved over the countless centuries into a superbly resilient and resourceful animal. Used primarily for guarding livestock and property, the Tibetan Kyi Apso is also a very fast and effective hunter. The breed is naturally suspicious of strangers and some specimens might be quite stubborn and independent, but with early socialization and proper training, the Kyi Apso can make an amenable companion.

Devoted to its owner and even-tempered, this lovely bearded mastiff will surely become very popular as a family pet in the future. There is only a small number to be found in the West, but the breed is well-represented and cared for by the Tibetan Kyi Apso Club, established in the 1990's. The body is strongly-boned and muscular, with a powerful neck and a wide head. The ears are fairly long and carried low on the sides. Deep-chested and long-legged, the mighty Kyi Apso is truly an agile and athletic Moloss, prized for its stamina end energetic nature. As is the case with most of its cousins, the tail of the Kyi-Apso is fully curled.

The rough coat is moderately long, dense and wiry, acceptable in all colours, but most common in black, black-n-tan, black-n-silver, brown, golden yellow and even uniform white. Average height is around 27 inches.