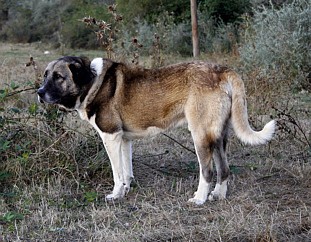 Although the Anatolian Mastiff name is sometimes incorrectly used for the Kangal and other Coban Kopegi breeds in the West, it should be noted that this is actually a separate breed, said to be older than other dogs found in modern Turkey. The most common local name is Malak, which describes the type, rather than the breed of dog. In some parts of Anatolia the name used to describe this variety is Balak, but all of these dogs have the same basic "old mastiff" type, with only slight regional differences. Due to the many fanciers' disapproval of the use of word "mastiff" for the description of their dogs, the breed has been given the new name of Central Anatolian Shepherd Dog.

While this decision may appease those who wish to avoid accusations of Turkish Mastiffs being English Mastiff crosses, the Central Anatolian Shepherd Dog moniker is also somewhat controversial and borderline nonsensical, simply because these dogs are neither found exclusively in Central Anatolia nor are they actual shepherd dogs at all. Commonly encountered in many areas, such as Nevsehir, Maras, Konya, Aksaray, Denizli, Agri, Erzurum, Burdur and many other parts of Turkey where dog fights are popular, some of these regional types are considered to be distinct "breeds" by their fanciers, as is the case with the Aksaray Dog, Tuzkoy Dog and some others, but they all simply constitute a single breed comprising of local types, close enough to the great Kangal to confuse some researchers, but different enough from it in key aspects to be treated as a separate variety.

The remarkable similarities to the old drawings of Assyrian war-dogs have led some fanciers to link the Turk Mastiff to the legendary Assyrian Mastiff breed, while others dismiss these native Turkish Molossers as recent crosses between the Central Asian Shepherd Dogs, Kangals, Saint Bernards, Great Danes and English Mastiffs. There is also a theory implying that this is simply an Azerbaijani Kanjal type of the Caucasian stock, but this is unlikely, even though some Anatolian Mastiffs do contain a percentage of the Kars Shepherd, through which the influence of the Azeri dogs is possible. The mighty Dakhmarda has also been suggested as a possible ancestor, but the Turkish Mastiff's ancestry is most likely connected to the ancient Hittites and probably rooted in the old working dogs of Persia and Greece.

Relatively unknown even in its homeland, this rugged giant is oftentimes unfairly overlooked and mistaken for a Kangal or a Kangal cross. While certain regional types do show the influence of the Kangal, it doesn't automatically relegate them to the status of a subtype of the Kangal breed, even though quite a few of these dogs have been exported to Europe as such. Due to the popularity of dog fighting tournaments, the Turks have been crossing dogs from various areas for a long time in order to create superior fighters, so some confusion regarding the actual background of such dogs when judged solely on physical appearance is to be expected. Some dogs are fairly lean and tall, while others are more massive and have larger heads, since there is a few different types of the Malak that can be found in various regions of Turkey, from examples that resemble heavier Kangals and Yoruk Sheepdogs to those specimens that are more similar to certain European mastiff breeds.

Reportedly vicious and fairly difficult to train, the Turk Mastiff is primarily a fighter and guard dog. The majority of these powerful Molossers spend most of their lives chained up as yard watchdogs, released only when they're taken to regional fighting tournaments. While they are sometimes used to protect larger cattle, these Molossers are rarely employed as sheep herders or guardians, primarily due to their aggression levels and difficulty of working alongside other dogs, but also because of their large size, weight and limited agility and stamina expected from shepherds. This old working breed is described as a one-person dog, devoted to its owner and protective of its family, but very unfriendly towards strangers and intolerant of other dogs.

Broad-shouldered, massive and muscular, the Turkish Mastiff is a rugged, well-boned and healthy breed, valued for its resilience and sharp temperament. The dense flat coat is shorter than that of Kangals, but not as short as the coat of an English Mastiff. Due to common matings with the Kangal, some Anatolian Mastiffs have longer coats and curled tails, but a typical representative of the breed will differ from these working cross-dogs. The tail is sometimes docked and the ears can be either cropped or left natural, depending on the dog's use and the owner's preference, but the majority of modern examples are unaltered.

The Malak comes in a variety of colorings, including the Kangal-like shades of fawn with a black mask, as well as brown, grey, red, cream or brindle, with or without small white markings on the muzzle, chest and feet, but there are also quite a few white-based dogs with large patches of those colors.

Average height for the Turkish Mastiff is around 34 inches, although smaller examples can be found as well.

See photos in our gallery