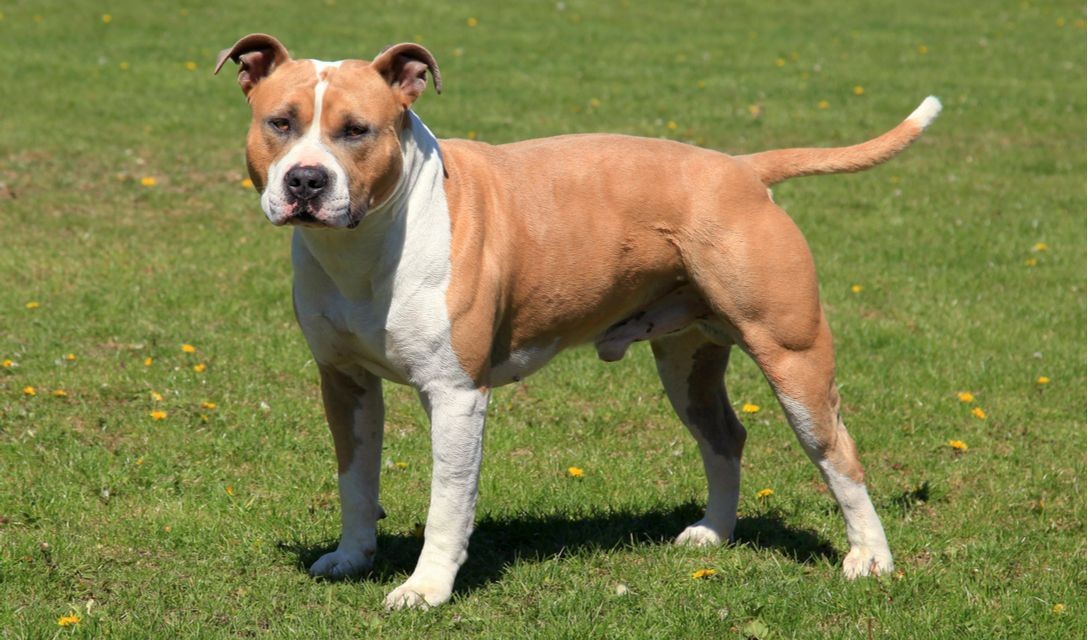 In the United States, the Staffordshire Bull Terrier breeders preferred taller and bulkier dogs than those in England, which resulted in the consistently larger AmStaff finally receiving separate recognition in 1936. Most American dogs were developed from early Irish Staffordshire Bullterriers, Dudley Terriers, English White Terriers, Manchester Terriers and Irish Bulldogs, as well as from old English and American working bulldogges and were primarily used as fighting contestants and hunters in the 19th century, but they eventually became valued family companions and property watchdogs, gaining tremendous acceptance all across the country over a relatively short period of time.

Sometimes called a "Show-Pit Bull", this is a very different dog than the unfairly notorious American Pit Bull Terrier breed, with which it shares its early history. It should be noted that many Pit Bulls are registered as AmStaffs and vice versa, creating a great deal of confusion and controversy. In addition to the issues associated with double-registering, there is also a large number of crosses between the A.P.B.T and the American Staffordshire Terrier to be encountered, which are often not truly representative of either breed, both in terms of appearance and temperament. There are some breeders in the United States and Europe which do not distinguish between these two breeds, angering many AmStaff fanciers and even more Pit Bull enthusiasts worldwide.

When bred and raised properly, the American Staffordshire Terrier is very loyal to its owner and remarkably gentle with children, which is why it is one of the most popular family dogs in America. Even though this is chiefly a show and companion breed, it still requires responsible handling and supervision around other dogs, because the AmStaff is still capable of inflicting serious damage when provoked. Muscular, agile and powerful, the American Staffordshire Terrier is a very athletic Molosser. This is a wide-chested and well-boned breed, with an elegant head, well-developed jaws and a strong neck. The ears can be either cropped or left natural.

The short coat is flat, stiff and glossy. Apart from uniform white and black-n-tan dogs, every colour is allowed, solid or particoloured. Unlike the A.P.B.T. breed, pure AmStaffs aren't accepted red-nosed. Average height is around 19 inches, although larger dogs exist.