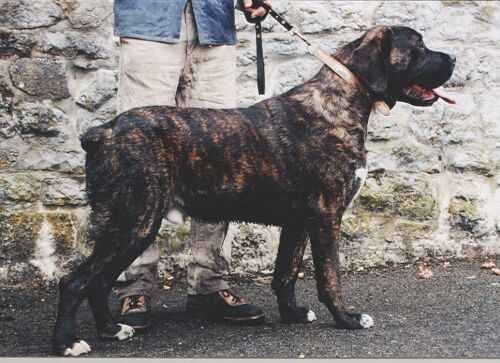 The original Belgian Chien de Trait of the Middle Ages is believed to be extinct today. A large and muscular breed, this was a popular rural Molosser in the past, descended from mastiffs, herders and hounds of Europe, primarily a working dog used to pull carts and protect farms. Fairly aggressive towards strange people and dogs, the Belgian Mastiff was a formidable guardian and watchdog, with many of the examples employed for cart-pulling being muzzled most of the time. This breed is said to have been affectionate with children and devoted to its owner, making it suited for family life. A trademark feature of the original Chien de Trait was the lack of a tail, the puppies being born bobtailed.

Due to some influence of other working breeds, there was a variety of types to be found by the 19th century, but the Matin Belge was finally standardized in 1895 and the Breed Club was formed in 1911. It was used as an Army dog during the 1st World War, employed to pull carts with arms and ammo, as well as for transporting wounded soldiers. The Belgian government supported the military kennel "Caserne Prince Baudoin" which collected dogs from Belgian farms and bred them for service work. Not many specimens survived the war and by the time fanciers started their revival efforts, WW2 began, ensuring the breed's disappearance. It has been considered extinct ever since.

In the late 1980s, a reconstruction program was started by G.Glineue de Boussu and Alfons Bertels, using some rural dogs believed to be descended from the original Matin Belge and crossing them with English Mastiffs, Bullmastiffs, Briards and Belgian Sheepdogs. After a decade of establishing the type and following the original Standard, these efforts were reportedly successful in re-creating the mighty Belgian Mastiff breed. The future might hold hopes of recognition and widespread popularity in Belgium, but for now, the Matin Belge remains fairly unknown, even in its homeland. The modern incarnation is not naturally bobtailed and is said to be less aggressive than its ancestors, making it more likely to gain acceptance. More massive than the original Chien de Trait, the present-day Belgian Mastiff has a large head, strong neck, and a well-boned body, with broad shoulders and a wide chest.

While the original incarnation had a thicker coat and a greater variety of colorings, including black-n-tan, black, grey and piebald, the modern Matin Belge has a short, smooth coat which comes in yellow, fawn, red and brindle shades, with or without white markings. The average height is around 29 inches.