This useful article was written by Kimberly M. Wang of Eardog Productions and contains some great tips about photographing your dogs.

As a kid, my pocket point-and-shoot camera was one of my favorite diversions, second only to the subject of my shutterbug tendencies: my dogs. Decades later, not much has changed. (Though now, I shoot with an SLR, and my dogs are vastly better behaved than the pets of my youth.) My pooch Theodore is not only my Service Dog, but he’s also my muse, and his adventures fill the pages of my blog, City Dog/ Country Dog,  which tells the tales of Theo’s adventures, split between city and country life.

So when the folks at Orvis asked me to share some of my tricks and tips for capturing exceptional dog photos, Theodore and I were more than happy to oblige.

Most important and the most easy to accomplish: take a lighthearted approach to your photo sessions and your dog will pick up on your vibe in a heartbeat.

The rest of my tips may take a bit more effort….

1.  Show your dog that The Camera is Your Friend

The first thing you can do to make picture taking more fun for you and your dog is to help him feel comfortable around the camera itself. Teach him that, ‘the camera is your friend.’ Some dogs turn their heads or exit the room as soon as a camera is presented, so if your dog is one of those guys, then desensitize him to the camera by carrying it around at random times and random places, and feeding him little treats when the equipment is in your hand. Let him sniff the camera and inspect it. And talk to him in a bright, upbeat voice when he gets close, and especially when you point the lens in his direction. If you can slowly and steadily associate the presence of the camera with good things (excellent, stinky treats and belly rubs often do the trick), then he may be more interested in paying attention and looking your way when it’s time to snap some photos.

Allowing your dog to relax is key. Some of the best photos can be achieved without having to ask your pooch to look directly into the lens, which is the equivalent of asking an impatient child to ‘smile’—you get the opposite result. I tend to follow my dog around while he explores, and hang out with him, shooting unobtrusively much of the time. Shooting in this way creates a low-pressure environment for your dog and allows you to capture his natural response to his surroundings. But when you do want him to look straight into the lens, squeaky toys and his favorite treats will do wonders. Just be ready to hit the shutter, as for many dogs, the novelty of the squeaky noise may wear off more quickly than you think.

Your dog will appreciate it if you end your shooting session before he grows tired of the process. Reward him richly with belly rubs and treats while he’s still feeling upbeat and engaged, and you’ll find he’ll be more interested and agreeable the next time you break out your trusty camera for another round.

2. The Background is Key

Along with making sure your pooch is at ease with your camera, you’ll also want to choose a setting that allows your dog to be himself. Make sure his footing is steady, and the environment isn’t too loud or distracting, so he can relax while you shoot and work to capture the perfect shot.

From an aesthetic viewpoint, you’ll want to seek out backgrounds that give your photo context and texture. Natural elements like a sand dune or mountain in the distance, or colorful flowers framing the edge of your frame will give your photos a sense of place. But aim to strike a balance between overly cluttered and devoid of detail.

3. Look for the Light

It’s worth noting that I never take photos of animals using a flash. Most aren’t keen on that sharp burst of light, and won’t enjoy photo sessions if the flash is firing constantly. Try shooting using available light instead. If you’re indoors, seek out a location near a window.

Outdoors, it works to shoot in full sun, or open shade, but it’s much more challenging to achieve a flattering exposure when half your frame is lit by the sun, and the other half is covered in shadow. Choose one or the other, unless you’re aiming for an ultra-dramatic look. The best light can often be found on overcast days, which will eliminate harsh shadows.

But for optimal light, try shooting in the morning before the sun rises high in the afternoon sky, or close to sunset, when the sky turns lovely colors and the light is soft and warm.

And as with any photo: Get in the habit of looking for the light. If you want to see your dog’s features clearly, then position him so that he’s facing the light source. Take notice of what parts of the background are illuminated, too. And be careful not to throw shadows on your dog as you shoot.

If you’re shooting with a point-and-shoot or an SLR with shooting modes, try the Portrait setting for quieter, more contemplative shots.  The Portrait setting creates a shallow depth of field by using a wider aperture, which means the background will be blurred while the main subject remains crisp.

When using this setting get in the habit of focusing on one of your dog’s eyes. If you can capture a crisp eye in your photographs, then you’ll become very skilled at creating photos that do an excellent job of conveying your dog’s best expressions. Then experiment with switching up the focus to make his nose the focal point, or the tips of his ears, or the pads of his paw.

Most SLR’s also have a continuous or burst shooting mode. If yours does, turn it on so that you can shoot a few frames every time you depress the shutter button. This way, if your dog blinks during one of the frames, you’ll likely still have two more frames in which his eyes are open.

For indoor photos, low light, or when working with a romping dog who won’t sit still, you’ll want to use a faster ISO setting. 400ISO is a good, all-around speed that will keep your subject sharp even as he dashes about.

Shooting from various angles is a great way to experiment with different looks and perspectives, and each angle conveys a different mood.  Shooting from below will give your dog a ‘heroic’ look.

Shooting downward from your standing height will give your photo an entirely different character.

But when working with dogs, it’s always good to include in every session shots taken from your dog’s point of view. Instead of shooting from human height, try getting down on his level. Often, I’ll crouch very low or even lie down on the ground to bring a more intimate feel into the photo.

6. Framing to Fit the Mood

Experiment with vertical and horizontal framings. A vertical shot often feels more intimate and formal, while a horizontal shot can communicate a more expansive and relaxed mood.

One last note, which we can count as the seventh tip:  in the age of digital cameras, it’s entirely productive and essential to shoot and experiment as much as possible. Give yourself ample room to shoot ‘mistakes’ since erasing shots you deem unacceptable is as easy as hitting the delete button. So, shoot, shoot and shoot some more. In the world of photography, practice does indeed make perfect. 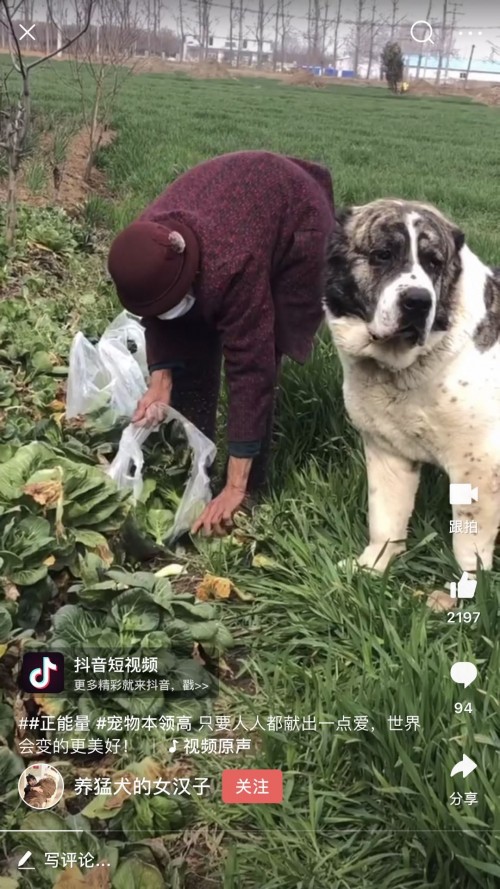 A grand mother and her dog in China help others by picking veggies from her garden and leaving on the roadside for free to people.

The Calgary Model   The animal control bylaw in Calgary, Alberta, Canada has been hailed by many as a HUGE success.  While other cities and provinces in Canada are banning breeds, Calgary is choosing education program and stronger enforcement.  What's the end result?  By all accounts, reports and statistics, the bylaw is working!   Not only that, the bylaw works so well and the results are so highly praised, Calgary is inspiring animal control officials outside of Canada to use the bylaw as a model for their own animal control ordinances.     The following is written by Dana Grove:   The bylaw officers in Calgary have taken a stand against breed banning, and responded to dog bite concerns

These 33 Dogs With The Most Unique Coats On Earth Took My Breath Away. My Favorite Is #7! These amazing dogs have such unusual colors and markings that once you see them, you’ll never be able to forget them. Some of these markings are a result of a rare genetic variations or conditions, but all of these dogs are undeniably beautiful. Of all the adorable and stunning dogs on the Internet, Reshareworthy.com collected and specifically chose the following 33 as the dogs with the most memorable and gorgeous markings!   This sweet husky has a natural little mask. This puppy also wears a mask! Everyone *nose* that this puppy has a lot of love to offer! This is Puck. He’s beautiful

Beware! Plants Poisonous to Dogs Know which plants and foods are no-nos for your dog. By DC Editors | Posted: Mar 19, 2013, 3 p.m. EDT People are often surprised to learn that there are actually hundreds of plants potentially poisonous to dogs many of which could be in your home, or yard. The following is a list of some plants, trees, flowers, and foods that are poisonous to dogs: American bittersweet roots, leaves, berries Apple seeds, in large amounts Apricot seeds Autumn crocus -  Its active ingredient, colchicines, triggers an anti-metabolic effect that can cause rapidly dividing cells, shedding of the gastrointestinal tract, bloody diarrhea, and vomiting. Learn more>> Avocad