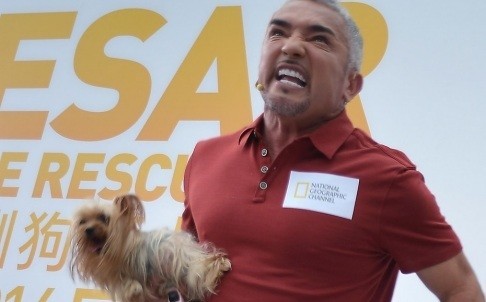 As a celebrated "dog whisperer", Cesar Millan knows a thing or two about animal behaviour. But often it's the owner he needs to teach.

According to him, Hongkongers who say dogs are too much of a handful for their hectic lifestyles are only making excuses.

"[Saying] 'I'm busy or it's hectic' - it's just an excuse to not be there for someone," Millan told hundreds of dog-lovers at Stanley Plaza yesterday.

The 44-year-old dog trainer to the stars is in town to promote and film two episodes of his reality TV show. He will also perform at the AsiaWorld-Expo tonight.

Between 2010 and 2012, almost 20,000 abandoned and wild dogs were put down in Hong Kong, with many others left in kennels and shelters. But Millan denied that the city's pace and lack of space made it unsuitable for dogs.

"Someone who abandons their dog is likely to abandon their families as well. The difference is, the family can drive away, but the dog can't. It's left there." Owner responsibility is a strong theme in his reality TV shows Dog Whispererand Cesar to the Rescue.

But owners need to be more than just responsible. Balanced dogs, Millan says, require strong 'pack leadership' from owners, in the form of exercise, discipline and affection. Most people give too much affection, and not enough exercise and discipline.

He pointed to a teenage girl who was clutching her terrier protectively as it was introduced to a bulldog several times its size.

"See what she did there?" he asked, as the terrier yapped. The terrier would not naturally be afraid of the larger dog, but it had become aggressive after picking up on its owner's fear, he said. "The dog acts that way because they want to protect the human, because the human is scared."

He picked up another dog which had become alarmed by the crowd. "The best thing to do is give him a massage. Don't let him hold the experience. Change the experience."

Millan's demeanour calmed the dog instantly. One fan, Jack Hoi, 58, a retired civil servant, admitted to having "some problems at home" with his mini-pinscher, Mickey.

Hoi said he watched Millan's YouTube show every night. "I love his philosophy on how to teach the owner," he said.

The Calgary Model   The animal control bylaw in Calgary, Alberta, Canada has been hailed by many as a HUGE success.  While other cities and provinces in Canada are banning breeds, Calgary is choosing education program and stronger enforcement.  What's the end result?  By all accounts, reports and statistics, the bylaw is working!   Not only that, the bylaw works so well and the results are so highly praised, Calgary is inspiring animal control officials outside of Canada to use the bylaw as a model for their own animal control ordinances.     The following is written by Dana Grove:   The bylaw officers in Calgary have taken a stand against breed banning, and responded to dog bite con

These 33 Dogs With The Most Unique Coats On Earth Took My Breath Away. My Favorite Is #7! These amazing dogs have such unusual colors and markings that once you see them, you’ll never be able to forget them. Some of these markings are a result of a rare genetic variations or conditions, but all of these dogs are undeniably beautiful. Of all the adorable and stunning dogs on the Internet, Reshareworthy.com collected and specifically chose the following 33 as the dogs with the most memorable and gorgeous markings!   This sweet husky has a natural little mask. This puppy also wears a mask! Everyone *nose* that this puppy has a lot of love to offer! This is Puck.